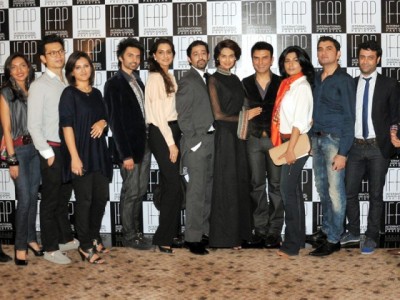 “I have a dream”, said model-turned-entrepreneur Mehreen Syed, in much the same fervour as Martin Luther King did, at a press conference to announce the launch of the International Fashion Academy Pakistan (IFAP), where she is the CEO.

Many have tried their luck with the idea of establishing a fashion academy and assumed that a seasoned player like Frieha Altaf, whose agency Catwalk is the only consolidated platform for modelling in the country, would be the first to establish an institute formally. But true to its title as the fashion capital, Lahore’s fashion coterie beat the urban professional metropolis to it by launching the first of its kind comprehensive modelling, fashion, grooming, make-up and photography institute to cater to this burgeoning field. “We have been wanting this academy for years, hoping against hope,” spoke model Natasha Hussain, the master of ceremonies, echoing the desperate need that has been expressed with an explosion of fashion in recent times.

With fashion bigwigs like Ather Shehzad, who are responsible for launching the careers of many supermodels in the country, and designers with critical acclaim like Kamiar Rokni and Hassan Shehryar Yasin (HSY), who have evolved into fashion ‘brands’ in their own right, the IFAP seems to be taking a step in the right direction. Syed’s narration of her own journey made her struggles and her dream even more believable. “I don’t feel ashamed in telling people that I didn’t even know how to stand in front of a camera, let alone know what to wear,” said the supermodel candidly. Syed’s struggle is the story of every young model who comes with the singular dream of making it big but just doesn’t know how to. What was noteworthy in this regard was Syed’s speech, which was conducted entirely in Urdu, inadvertently sending out the message that making it big means staying true yourself, and that language cannot be a hallmark of success.

However, one couldn’t help but notice a senior faculty member walking in two hours late to the press conference, and then what kind of impression does one get of the academy? The first rule of education is discipline and inculcating the adage that ‘time is money’ is crucial. For an industry as stereotyped as fashion, simple measures like punctuality are the basics that one needs to inculcate and then build on with communication skills.

Additionally, IFAP Director Uzi Xaidi — currently running the Goldstein Modelling Agency and the Goldstein Acting Academy in Toronto — intends to utilise his foreign experience locally to produce ‘not only careers but personalities’ with IFAP. In a country with no culture of training, IFAP is offering essential skill development mechanisms through certified diplomas with a series of in depth courses, such as Runway Coaching, Photo Shoot Direction, Health & Wellness, Acting Essentials, Hair & Skin Care, Spirituality and Speech Enhancement.

While the institute is currently only based in Lahore, it hopes to expand to other cities such as Islamabad, Karachi, Faisalabad and Peshawar. The eventual goal, as former model Iffat Umer pointed out, was to “Guide upcoming talent and market them. IFAP is not just for models but even for professionals who want to look good.”

The institute currently boasts of Shahzad Raza as the Head of Faculty and HSY as the Head of Visiting Faculty, along with a diverse mix of visiting faculty such as Umar Sayeed, Deepak Perwani, Nickie Nina, Kamiar Rokni, Mehdi, Nomi Ansari, Iman Ali, Saba Ansari, Iffat Umer, Shammal Qureshi and Redah Misbah among others.