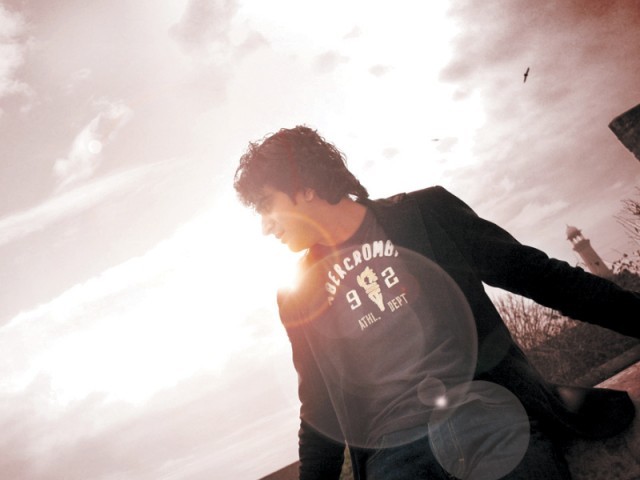 Bollywood opened its arms for Pakistani pop icon Atif Aslam after he became an established brand courtesy of his song “Aadat”, whereas Shafqat Amanat Ali and Rahat Fateh Ali Khan already had the voice and the family name that made Bollywood trust their skills. However, the artist who has recently forayed into B-town has a totally different tale to tell and very original music to sell.

An advertising man by day and a musician by night, Shahvaar Ali Khan, a Lahore-based musician, is the one behind the background score of director Rohit Dhawan’s upcoming Bollywood flick Desi Boyz. The film stars Akshay Kumar and John Abraham portraying the characters of two tradition-bound boys who travel to study at Oxford University in England and later get trapped in the recession that hits the country.

For a change, director Mahesh Bhatt is not the person responsible for this cross-cultural venture. In actuality, this Indo-Pak collaboration was a cordial agreement between Khan and director Dhawan, who have been friends since college. The two were batch mates in Trinity College Connecticut, and while explaining the nature of their friendship Khan says, “As friends, Rohit and I are like Desi Boyz. Our story is similar to the film, because in spirit, Desi Boyz is a tale of friendship of two desi friends abroad.”

Khan’s ticket to Bollywood is a song titled “Filmain Shilmain” that is dominated by country music but also has elements of Pakistani and Indian filmy beats. The song itself has captivated the audience with its reminiscent feel. It takes the listener to the good, old carefree days, when sipping tea at roadside stalls and jamming at college concerts defined life.

It seems that Khan has been faithful to his inspirations as the musical influence of legendry composers like OP Nayyar, SD Burman, RD Burman and Salil Chaudhary is apparent in the overall structure of the song. However, despite the appreciation this background score has been receiving, Khan doesn’t consider it to be his “break into Bollywood”; “Since my primary project is a solo song called ‘No Saazish No Jung’ — the video of which will be released soon — I don’t consider this opportunity a break into Bollywood, but I’m still happy that my music is being recognised on international platforms,” states Khan.

Though the song is just the background score and will not be featured in the CD, the up-and-coming artist feels he owes a lot to Rohit’s father, David Dhawan, who is a well known producer, and also to Pritam, the music director of the film.

“David Dhawan has really taught me how to tap the pulse of the ‘audience’. Previously, my music was esoteric and conceptual but his guidance helped me get a grip of the ‘hit meter’,” Khan explains.

Evidently, “Filmain Shilmain” is not only a step forward for Khan but also a trend changing decision for Bollywood. In the time when pop qawwalis and bhangra monopolise Bollywood music, the use of a pure Pakistani country song as a background score for a commercial Bollywood film is something experimental and fresh. “Interestingly, the song hasn’t been changed, rearranged or rewritten to meet the standards of Bollywood. It is being used in its original form and will only be remastered for cinema sound.”

With Khan’s latest project in Bollywood making news, all eyes are fixed on his original song which according to him may release before the film. The video of “No Saazish No Jung” has been shot in by Ravi K Chandran, who is a renowned cinematographer with films like Ghajini and My Name is Khan to his credit.