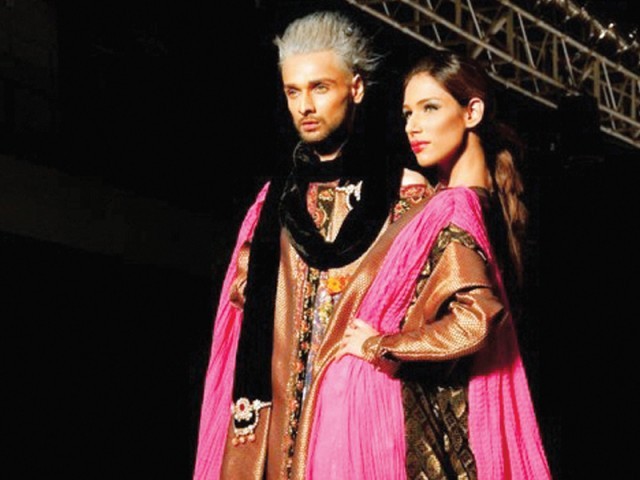 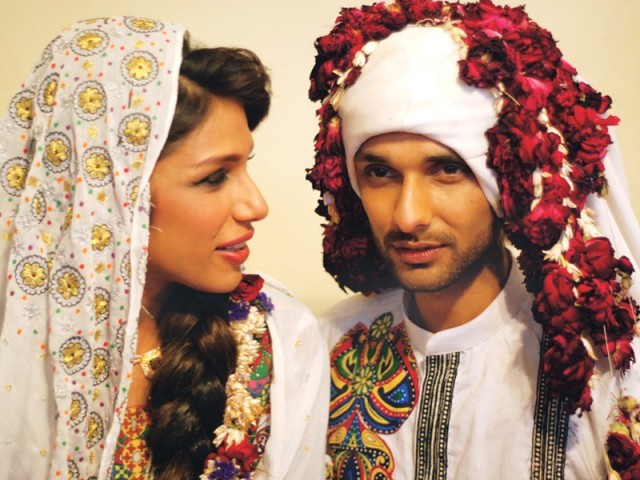 From best buds to husband and wife, Syed Mohammad Rizwanullah and model Fayezah Ansari have certainly come a long way in their relationship.

They have both earned a niche for themselves in the fashion industry; Rizwanullah due to his ethnic and edgy design aesthetic and his quirky sense of style, Ansari with her flawless walk on the ramp and charismatic photos. Hence, when the news of this ‘merger’ hit the town, the entire industry, along with friends and fans, were sent into a frenzy.

However, six months down the lane, the couple, who sent shock waves in their Toni & Guy ad which epitomized raw sensuality, look happily married as The Express Tribune sits down with them for a light chit chat at Butlers Chocolate Cafe. Arriving before his wife, Rizwanullah seems excited, showing his enthusiasm for what he knows he is going to divulge.

Naturally, and of course out of curiosity, the first question that pops up in one’s mind is; ‘How is it like having Fayezah Ansari as your wife?’ To which, the brash designer replies, “Better than what I had expected it to be. Fayezah is downright open and frank with everyone; and that worked for her as she became apart of the family. She is greatly loved and accepted in my family.”

Describing ‘being in love’, Rizwanullah says, “There are toads in your stomach, your heart races fast, there is shyness and it’s hot and cold. That’s how I would define love.” However, all is not like they show in the movies and the designer pragmatically adds, “Marriage has its own challenges and the most important thing is the level of responsibility that hits you. You are in a position where you are held responsible for her actions and she for yours.”

When Ansari, who arrives after ten minutes, is asked the same question, she firmly says, “Marriage is certainly not meant for children, I am 100 per cent sure about that. Immature people shouldn’t even go near it,” adds Ansari, who is clad in an Uth Oye top,and is carrying a Pakistani flag-inspired clutch by Mahin Hussain.

Although, they were friends from before, the couple chose to take the traditional path and relied more on the decisions of the elders in the family. Hence, the final decision was made by Rizwanullah’s mother. “When you marry a friend, there are no major compromises needed. But, there is always a third party intervention,” says the designer matter-of-factly.

Upon the importance of advice and suggestion by elders, Rizwanullah states, “Married people will always understand married people.” However, not stopping here, he adds, “But others should also try and understand that we are free people in our own right. Around the time I was going to get married, people would constantly ask me ‘Will you let her model after she is married to you?’ And I would think, ‘Well, if that’s the case, would she also restrict my designs?’” On the contrary, the young designer says that he is is trying to convince his wife to go international. “Even if you put rags on her, she would end up selling that stuff.”

When asked how the couple feels about the transforming relationship and the sharing of the most personal details with each other, Rizwanullah says, “With marriage comes this joy in sharing. Your spouse ends up being that special someone, whom you love to share stuff with. Before marriage, I was just not interested in sharing details about my work, but with Fayezah, I often share my ideas and intricate details of my work.”

Describing her marriage as a ‘romantic comedy’, Ansari relishes the fact that the two have been friends for such a long time that they were completely comfortable with each other, even before they got married. “But I must tell you, he was a horrible friend. He would screw up dinner plans when we had to go with a group of friends. Then there would be times I would fight with him and we wouldn’t talk for days; but I would still to go to his place and hang out with his brothers.”

Philosophising more on the topic of marriage, Rizwanullah explains how the same institution can be hell or heaven for difficult people. “If time flies, then it means you are having a blast, but if married life is completely miserable, then it would be really different to handle the relationship. Like a designer collection, which has trendier, young and fun clothes, as well as the darker and gloomier hues like black and gray, a marriage also has bright and gloomy days the same way. It’s something one has to just embrace, accept and live with.”