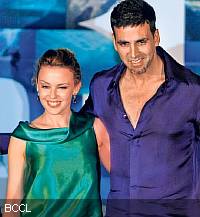 While our Bollywood hunks Sanjay Dutt, Akshay Kumar and the youngest one of the lot Zayed Khan — who publicly confessed of being a die-hard fan — couldn’t stop gushing about their Blue co-star Kylie Minogue during the Aussie hottie’s recent visit here, Kylie revealed that she finds Indian men quite hot too.

And though the pop princess admitted that to say who’s the sexiest of them all is a tough choice to make, Kylie said, “I’d have to ask Akshay to stand up for this one. I think he’s really hot.” Adding that Akshay not only scores high in the looks department, but is also quite a gentleman, Kylie said, “Men like him are a rarity. And I am glad that we got to work together.” Well, seems like this khiladi has gone international once again with this firang fan!