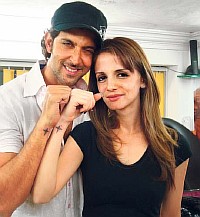 The recent couple to be bitten by the tattoo bug is Hrithik Roshan and his wife Susanne Khan. The two got a tattoo done on their forearm. Thankfully, Hrithik and Susanne didn’t get each other’s names tattooed but instead opted for a six-point star. The six-point star, also known as Solomon’s Seal, The Star of David or Creator’s Star is symbolic of interaction of the divine with the mortal.

Sameer Patange, who tattooed Hrithik and Susanne, said, “They have got a six-point star tattoo with a red circle in the centre. The reason why they wanted the particular design was too personal for me to even ask them.”

It is learnt that the star couple decided during the shooting of Kites in New York that they would get the six-star tattoo done. Incidentally, Hrithik’s father Rakesh Roshan too has a similar tattoo on his arm.

Even Hrithik’s co-star and close friend Barbara Mori has got a tattoo done on her forearm. Patange said, “Barbara along with her brother got a word tattooed in Hindi, which stands for brotherhood and is symbolic of sibling love.”

Talking of tattoos, Sanjay Dutt not only has wife Manyata’s real name Dilnasheen tattooed on his arm, he also has the symbol of his star sign Leo tattooed on his biceps. Keeping with her image, Urmila Matondkar has a fairy tattoo.

Talking about some recent tattoo trends, Patange added, “The traditional clientele earlier used to be men and women between 18 and 32 but now, I also have older people who not only get their spouse’s name tattooed but also are more inclined towards religious and spiritual designs.’’