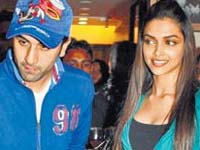 Ranbir Kapoor has decided to give up smoking as a b’day gift to girlfriend Deepika. Deepika Padukone couldn’t have had a better beginning to 2009 and her birthday yesterday. A source close to Deepika says, “Deepika didn’t like Ranbir’s smoking habit. As an advance birthday gift, he promised her that he would give up smoking for her.

From January 1 this year, after being a smoker for years, Ranbir has completely quit smoking. Lots of people tried to make him quit but they didn’t succeed. Now he has given it up for Deepika.” The actress is proud of the fact that the Kapoor lad has not lighted up in the last five days.”

The source continues, “The best thing is that she never nagged him about smoking. She accepted him the way he was but Ranbir realised that she didn’t like his habit, as she was always uncomfortable when he smoked around her. So he made a resolution to quit. It’s a big decision for him and even his mom (Neetu Kapoor) doesn’t know that her son has kicked the butt.”

When quizzed about being together Deepika says, “I don’t like talking about my personal life. All I will say is that Ranbir keeps me very happy and secure.” Deepika had a quiet birthday with her parents yesterday. She went to Siddhivinayak Temple followed by a quiet dinner with boyfriend Ranbir in the evening.

“My parents and sister were with me last week during Christmas and New Year’s but my sister had to attend a tournament, so she flew off on Saturday. I never like celebrating my birthdays much. But I do make it a point to go to Siddhivinayak. It’s been a great year for me and 2009 looks even more promising.

She adds, “It’s been a wonderful birthday this year. I couldn’t have asked for two better gifts. Also I am leaving for the premieres of Chandni Chowk To China all over the world. Nikhil Advani has taken the film to a whole new level. The most exciting thing is that the film will be premiered at the Warner Brothers Village in Los Angeles.”