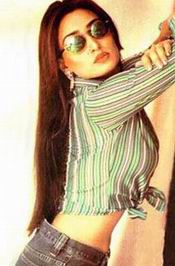 Lollywood super star Reema says she would like to marry a man who is compassionate towards others, is neither a spendthrift nor a miser. All the more, she said in an interview, she will choose a life partner who could keep her happy. She made it clear that so far she had not met the man having such qualities and did not know whether and when she would find him.

In her mid-twenties at present, Reema had started her career over a decade ago. Within that time she catapulted to prominence on account of her performance and compelling charm, outmatching all her rivals.

Reema said she would take care of the likes and dislikes of her would-be spouse. The actress said that all the scandals in which she was allegedly involved mushroomed over a period had proved false and that she was still a pure girl. She did not say anything against those behind the scandals.

In response to a question, Reema said purity of soul was reflected on her face – and in fact on the face of everybody – and this was how she would like to define beauty.

Reema offers prayers and recites Holy Quran regularly. But she doesn’t see any contradiction in her religious duties and professional obligations – dancing being one of them. Obscenity and vulgarity, she said, had nothing to do with dance and they should not be mixed up. Reema doesn’t like politics because of the reputation of its practitioners.