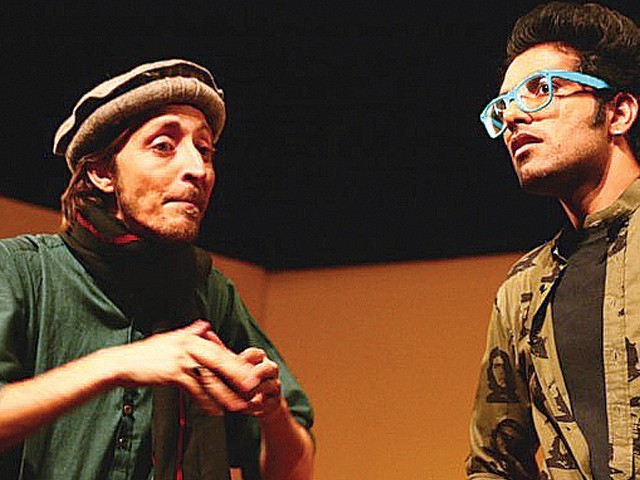 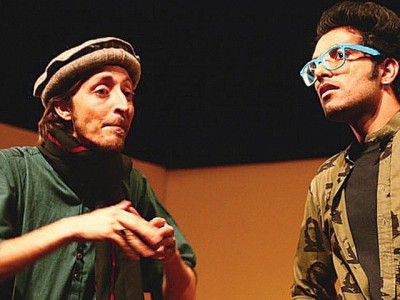 This has been quite an eventful week in the world of performing arts, from the death of the legendary Moin Akhtar to the staging of an original Urdu musical, Sabz, at the Arts Council. The premises of the Arts Council pulsated with patriotic sentiments, foreshadowing what was to come later on in the play.

A short comic performance about the current situation of the country was staged by theater students of the Arts Council preceded the play and set the right mood.

The original musical, which ironically does not have original music, is a presentation by the theatrical company Hazaar Daastan and is written and directed by Abdullah Farhatullah. The cast of the play includes Farhat Abdullah, Yasir Hussain, Muaz Raja, Raza Shah, Jannat Nekokara, Bint e Arsalan and Mohammad Azeem, whilst Wahab Shah has done the choreography for the play.

As the curtain rose, the minimalistic yet very avant-garde set design with yellow walls and pink doors immediately caught the eye of the audience and the two protagonists who appeared on stage to open the play left one in fits of laughter right away.

The story of the play is very simple, as we follow a director, played by Farhat, who is trying to produce a play with two actors, one female actor who is also an assistant and a metro-sexual stage runner.

The script of the play is very slick, well structured and above all, written in colloquial Urdu. It breaks all the stereotypes that have laid the foundation of contemporary theater in Karachi. Through dialogue, the actors comment on prevailing controversies such as illegal use of original music (as was the case with AR Rehman’s music in a play staged recently in Pakistan), to Blackwater Worldwide (through a parody of the Bollywood song “Yeh Kaali Kaali Aankhein” which was turned into “Yeh Kaala Paani Peena Parega”) and WikiLeaks (through a comparison to a new brand of diapers).

However, the narrative is such that if you leave the play and come back after a few minutes, you won’t miss anything because there is not much happening with the story itself. Instead, it is the satirical comic punches that really drive the narrative.

In terms of direction, the play hit the bulls-eye. Hats off to the director who, despite having only three to four characters onstage, managed to use the available space superbly. Farhat also managed to effectively break the ‘fourth wall’ of the stage as all the characters left the stage and distributed sweets amongst the audience. The audience was thoroughly delighted and involved, and that is what a theatrical experience should be like.

Karachi’s stage got to see some very talented actors such as Yasir Hussain, Muaz and Raza who have earlier performed in plays like Bombay Dreams. They gave outstanding performances as emotions came very naturally to each of them, and all three seemed almost tailor made for their respective characters.

By the end of the play the audience did have goose bumps and it was definitely a thought provoking performance albeit a little preachy, especially when Farhat’s character starts to talk seriously about Pakistan. One felt that the play wouldn’t have worked without the songs and they were forced into the script, but the lyrical content does support the narrative to some extent and if nothing else, the songs allow you time to purchase popcorn.

All in all, Sabz comes as good competition for plays like Chicago and Bombay Dreams because it has the potential to penetrate the market at greater level given that its script is contemporary and relevant. It is a much watch for everyone.

The play runs daily till May 4 at the Karachi Arts Council at 8 pm.