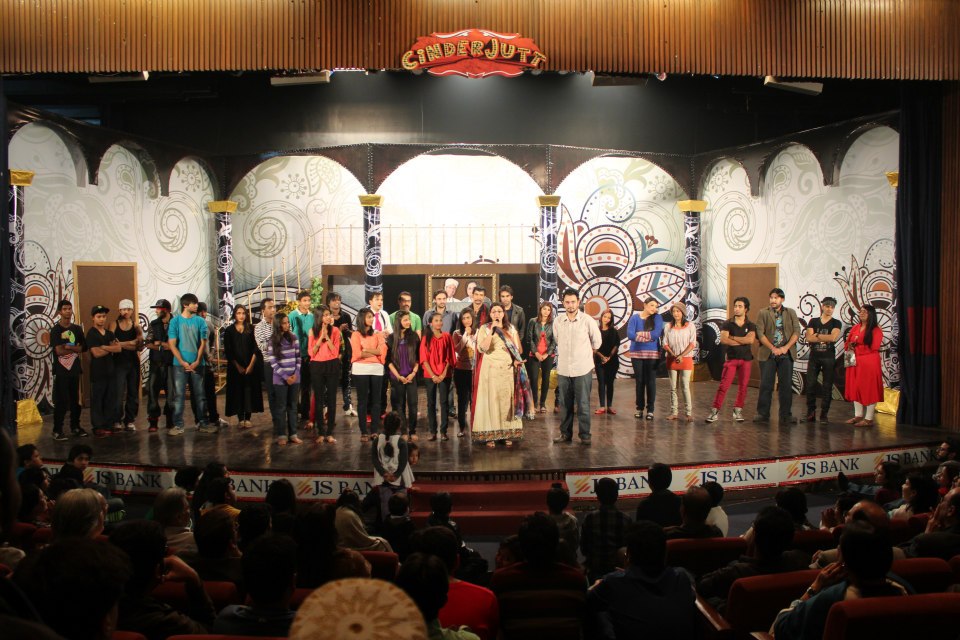 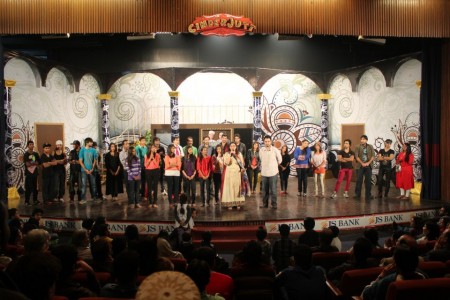 CinderJutt (currently showing at Arts Council till the end of January  can best be described as a hot curry of cold stereotypes, garnished with a few Bollywood item songs. The cast includes a Pathan, a gandasa-waving Jutt, a homosexual fashion designer and a Lakhnavi man who greets everyone with an “adaab”; there is also a Sikh and an ajrak-clad Sindhi.

The title of the play may pique audiences’ interest for its peculiarity, but the story fails to offer more than an elaborate set design and Bollywood numbers.

Directed by Javed Ahmed Saeedi, the play is a contemporary take on Cinderella. The story is about three brothers, out of which one is ridiculed by the other two and his stepmother. Unfortunately, the script is weak and leaves one wondering where it is headed; it ends with a feel-good public service message of loving Pakistan and promoting education for all. While the non-stop comedy resembles an Omar Sharif play in terms of format, CinderJutt is not nearly as funny or socially relevant.

As far as the play’s strength goes, credit must be given to the CinderJutt team for an elaborate production. From the set design to the duration of the play, it sailed quite smoothly. The set is guaranteed to take your breath away, but the presence of a JS Bank ATM (the official sponsors of the production) is a little out of place.

Credit must also be given to the National Academy of Performing Arts (Napa) for churning out formally trained artists and raising the bar for actors high, proof of which is actor Saqib Sumeer. His phenomenal acting and improvisational skills in CinderJutt single handedly hold the play together. Faizan Sheikh, as Talwaar Khan, does well for his small yet noticeable performance, managing to earn smiles. The rest of the cast under-performed  and were almost like A’ Level students working on a big budget.