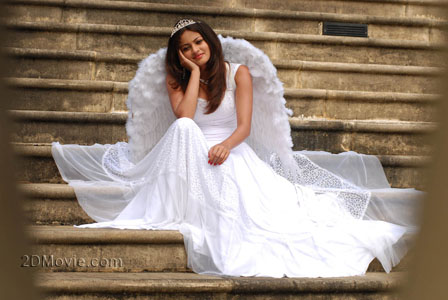 Sneha Ullal, whose next release Kaash Mere Hote is round the corner, tells Jyothi Venkatesh in a khullam khulla baatcheet…

Sneha Ullal, better known as the look-alike of the pretty Aishwarya Rai is back with a bang after a long period of hibernation after Aryan with the film Kaash Mere Hote. When I met her for this interview in the suburbs, Sneha categorically stated that it was a conscious decision on her part to let acting take a back seat after Aryan because she felt that she was too young and wanted to be mature enough to take her plunge in films. “I did not even know how to talk to the media.”

Sneha hastens to add that the reason that she decided to take up the offer to act in Kaash Mere Hote is that she desperately needed to act in a Hindi film to show that she is interested in working and is back in films. In fact Sneha has absolutely no qualms to confess that the film is a vehicle to launch Kumar Saahil and Sana and music director Shrawan who has produced the film wanted her to be a part of the project because he felt that she would be able to lend the film a better face value.

Sneha confesses that though personally she does not feel bad when she is compared to Aishwarya professionally she does not like the comparison. “Though I like it personally because she is beautiful, it is unfair to me professionally. I feel that had I made my bow without Salman Khan in a film, other than Lucky, I would not have been compared to her. The comparison did not help me as an actor though I should admit that it gave me a lot of recognition”.

Sneha asserts that she worships work and does not regret at all having appeared in Aryan opposite Sohail Khan after having made her debut with Lucky opposite Salman Khan, though she concedes that she does not think that she should have got launched with Lucky because she was very young at that time. To add to my woes, a lot of directors have an issue with my voice not at all realizing that my voice in Lucky was projected that way to make me sound like a kid to suit my role in Lucky.”

Besides Kaash, Sneha has also films like Click, Dard E Disco and Green Park up her sleeves besides her films in the South. “Sangeet Sivan called me up and offered to cast me in Click opposite Shreyas Talpade. It is a very interesting role that I play in Click. I play Shreyas’ friend who is raped by his friends. I kill myself and come back as a ghost to take revenge on the rapists.”

In Ashok Tyagi’s Dard E Disco, Sneha has been cast opposite Akshay Kapoor. “I play the character of a bubbly young ad glamorous girl. The film has offered me an opportunity to tell every one in Bollywood that I am no longer a kid that I was in films like Lucky and Aryan.”

Sneha is quite excited about her role in Green Park too. “I love my role in Green Park because I love talking in English and it is a film in English with Anupam Kher playing the role of my father. I play a very modern young girl belonging to a very westernized family settled in USA, who falls in love with an American. The film was meant to start in 2009. We have shot just the climax of the film in Goa and I am looking forward to shoot the rest of the film in the USA next year”.

Sneha is practical when it comes to exposing herself. I am ready to expose as long as I look sexy and not vulgar. In my second film, I showed nothing but my mid-riff but yet I was shown at my glamorous best in the film. I am game as far as wearing swimming costume is concerned but no bikini for me, please.”

Sneha has drawn a line as far as kissing is concerned. “Though I am now single and ready to mingle, I am not a prude but I am not game at all for kissing lip to lip in films, because I feel that you should save something for the bedroom. I am an animal lover and hence promote vegetarianism and hence want my man also to be a vegetarian. I do not care about his physique but he should be presentable and quite understanding and not be a male chauvinist.”