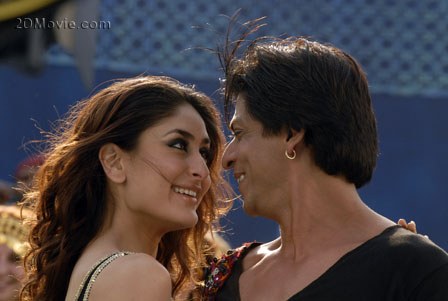 Waiting for yet another Shahrukh flick? There is good news – you would not have to wait much to see The King Khan, as his latest flick – ‘Billu Barber’ is expected to hit the theaters in the first quarter of 2009. A remake of the Malayalam film ‘Kadha Parayumbol’, this comic movie has been produced by SRK’s Red Chillies Entertainment. It stars Shah Rukh Khan, Irrfan Khan, Lara Dutta, Om Puri, Rajpal Yadav and Asrani as its main characters. The news is abuzz that Kareena Kapoor, Katrina Kaif, Priyanka Chopra and Deepika Padukone will also be seen in the movie, in guest appearances.

While the lyrics for ‘Billoo Barber’ have been written by Gulzar, Pritam is the music director for this humorous movie. It is for the first time that Shahrukh and Irrfan will be sharing screen space. With the likes of Om Puri, Rajpal Yadav and Asrani in the movie, rest assured that you are going to have a fine taste of comedy. The film is a tale of two friends, a modern adaptation of the platonic relationship shared by Krishna and Sudama. Priyadarshan is expecting to strike diamond with this movie, as it would mark his 75th film as a director.

In the movie, Irrfan Khan plays the title role of Billu Barber (present-day Sudama); Shahrukh will be seen as Sahil Khan (present-day Krishna). The movie revolves around the life of Billu Barber, his wife (Lara Dutta) and their two kids. Billu is a village barber experiencing a slow down in his business, primarily because he fails to adapt to the changing fashion trends. It is during this time that a film unit comes to his village, with superstar Sahil Khan as the hero. Billu tells everyone in the village that Sahil is his old friend. Instantly, the villagers take a keen liking to Billu.

All the villagers want to meet Sahil Khan and believe Billu to be the perfect person, who can help arrange a rendezvous with him. Now, Billu tries to meet the actor, but is unsuccessful in the attempt. This makes everyone suspicious about his claim. Not only the villagers, but even his family members believe that he was lying about his friendship with Sahil. What will Billu do now? Will he be able to meet his friend? Will Sahil recognize Billu? Will Billu’s family members and villagers believe him again? The answers are for the viewers to unveil as the movie hits the theaters in 2009.