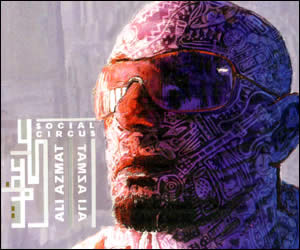 Pakistan. Breaking away from the traditional aura of Junoon, Ali has gone all guns blazing in this latest offering of varied moods and personal life experiences. In fact it seems that Ali has tried hard to stay away from traditional Junoon territory and in doing has fallen flat on its face with glaring moments of mediocrity. However, the major portion of Social Circus stands out as original and inspiring musical extravaganza.

Social Circus is one album which impossible to digest in one listen. Infact the album grows on you over time. Some say that it too much for an average Pakistani listener, but Ali is convinced that the musical expression he has used for his personal life experiences would hold its own meaning for each individual.

The album starts with a rather disappointing title track called Deewana. Inspite of Ali’s personal liking for the song, it fails miserably to register in the mind and is easily forgettable.

Moving over to ‘Mein Challa’ a fast paced ‘Matrix’ styled song, presents some impressive vocals and some really funky guitar work, definitely worth a listen.

The next track switches gears to a slower pace, a new style of deep throaty vocals for Ali’s versatile vocal range. The song is about Ali’s emotional losses during his life, his disappointments and questions the meaning of life. The song is impressive to say the least, one of the best of the album!

The next song ‘Na Re Na’ is the jewel of the album. Absolutely unique and moving.! Ali shines bright with his amazingly expressive vocals and brilliant composition. The song is quite tumultuous is pace and is rendered with emotional splatter of Ali’s roller coaster life.

Moving over to ‘Dil Ki Sira’, a failed attempt to fuse jazz with pop. The song hardly suits Ali’s style of vocals and is easily forgettable.

‘Mein’ comes out of the melancholic overtures and suggests the unlimited opportunities for the individual. The song is laced with some good lyrics and as usual Ali’s brilliance written all over it.

The change of mood in the previous is accentuated in the next song titled ‘Dil Ne Dil Se Kaha’. The song is very peppy and takes the listener along to a ride to paradise.

‘Yaar Mere Yaar‘ possesses some very funky bass work of Sameer. The overall arrangement of the song is very good and the lyrics, as usual throughout the album, are very good indeed.

‘Piyaas’ is a disappointment, considering the high quality of compositions of the album. A quick change of track brings us to ‘Dil Ka Jahan’, an average song, somehow giving a feeling of a rip-off.

‘Teian Perchian’ starts off promisingly with some unique vocals, but fails to keep up to the promise. The lyrics are brilliant but the pace of the song becomes a drag after a while. Throughout the songs you expect the song to take a new turn but the songs ends leaving the listener in a lurch.

The overall production quality of the album is truly superb and sets the benchmark for the rest to follow. The seasoned crew of the band comprising of Sameer on Bass and Ziyyad on guitars has truly done justice to their talents.

Social Circus is a must buy!