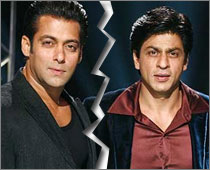 As is norm nowadays, the Khans are out to one up each other again. Just as Shah Rukh announced two new shows on television, Salman announced that he is all set for his second stint with TV as well.

Branching off from movie production, Shah Rukh has been doing fairly well for himself and his production house Red Chillies Entertainment. He recently produced the show First Ladies on NDTV Good Times and is now about to launch Knights and Angels and Ghar Ki Baat Hai on NDTV Imagine.

Knights and Angels is a reality show that will have King Khan as a judge who is looking for cheerleaders to bring up the spirits of his IPL team the Kolkata Knighter Riders. Ghar Ki Baat Hai on the other hand is a traditional sit-com, a story of the everyday lives of the Yagnik family and their neighbours.

Just as SRK was getting comfortable with his new monopoly of sorts, Salman says his fans won’t have to wait long to see him back on the small screen for the second season of the immensely popular Dus Ka Dum.

Few dedicated fans might recall that the infamous spat between these two ruling Khans of Bollywood was actually because of a rising clash of interest thanks to their role on TV shows. Salman Khan, in a somewhat drunken state invited SRK on his show. SRK refused. This stung Salman a great deal as he had appeared on Kaun Banega Crorepati along with girlfriend Katrina when SRK was the host.

As SRK was hosting the not-so-popular Kya Aap Paanchvi Pass Se Tez Hain at the moment, Salman hit out at the failure of the show and threw the success of his own at Shah Rukh’s face.

Some say it seemed fisticuffs were imminent, but were avoided thanks to the women – Katrina and Gauri who intervened and pulled back their significant others.

It seems life has come full circle and history is about to repeat itself. Will the two see this as an opportunity to mend their relationship or will it further deepen the hurt?

More importantly, since war has already been declared, who will emerge the victor?