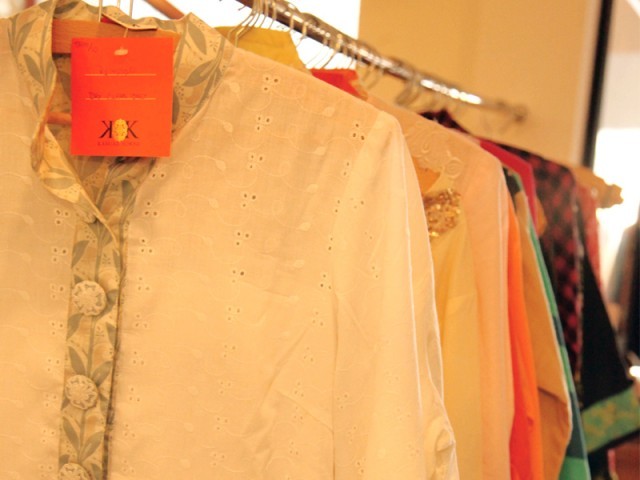 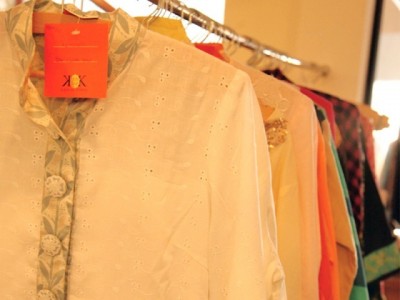 With a collection of 16 dresses, four of Nomi Ansari’s latest designs featured full-sleeves of jamawaar with blue and shocking pink palettes of chiffon to make flowy shirts. This was Ansari’s formal line priced between Rs35,000 and Rs65,000.

Kamiar Rokni introduced a range, mostly in cotton, of colours appropriate for summers. However, the collection also included more sophisticated pieces with white as their primary colour. The price ranged from Rs5,000 to Rs 9,000.

Rana Noman Haq’s Eid collection primarily featured cream coloured cotton net and chiffon collection. The cotton net collection with diamantes and pearls on the necklines made it more appropriate for more formal events around Eid. With flowery prints on its chiffon’s dresses, the collection was priced between Rs8,500 and Rs32,000.

Nida Azwer followed her signature style with a cotton line featuring block prints. Azwer’s collection toyed with grey, beige and other pastel colours. With unique cuts and leather work on the necklines and sleeves, the collection was priced between Rs9,000 and Rs30,000.

Ali Xeeshan’s collection — including a Rajastani coat priced at Rs35,000 and other crush-cotton pieces with velvet tops and diamantes — was a daring attempt which stole the limelight. The designer also introduced shawls, with golden sequins, which gave a very royal look. Xeeshan’s collection was a delight to look at and can be worn at weddings as well.

The House of Ensemble welcomed Zara Shahjahan with her Eid collection that featured broaches with small diamantes on the neckline, which gave the creations a formal look. The collection was priced between Rs7,000 and Rs14,000

With 29 pieces, Wasim Khan’s collection featured animal prints in dark tones of brown and beige, which seemed more suitable for sombre women. The collection was priced between Rs8,000, and Rs28,000. Talking to The Express Tribune, Shezray Husain, director at The House of Ensemble says: “Wasim Khan has come back after a break to stock at Ensemble. We are very excited to be stocking his collection and the response has been great. Kamiar Rokni, Nida Azwer, Rana Noman and Nomi Ansari are part of the Ensemble family and their Eid collection captures the essence of our festive season perfectly. Zara Shahjahan is our newest addition and it’s good to have her onboard.”

Originally scheduled for Tuesday, the event was delayed by a day owing to the security threats in Karachi. The Eid collection at Ensemble is yet to bring HSY designs, which have been facing delays for the same reason.

Commenting on the impact of the city’s situation, Hussain says: “This year the joy of Eid is marred by the situation in Karachi, but we hope things will improve in days ahead.” The same collection will be available in Lahore from Saturday, August 27.