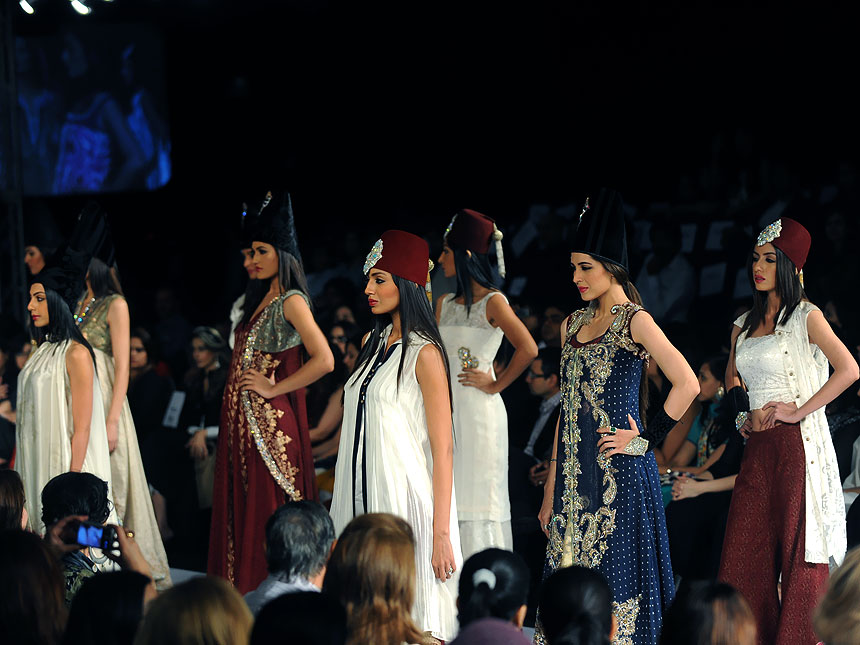 The third day of PFDC Sunsilk Fashion Week finally showed the creativity one expects from a four-day event such as this one. With a line-up featuring young talents like Ali Xeeshan and the quirky designs by the House of Kamiar Rokni, the night showed that there is hope for fashion in the country.

But the bursts of creativity weren’t present from the word go. The first show of the night by Yousaf Bashir Qureshi, was theatrical but offered nothing new. Qureshi showed his talent with his signature draping and melded art with fashion. He maimed and scarred Aaminah Sheikh with paint to depict how Pakistan, Karachi in particular, has been hit by terror attacks. It was a departure from his last show, which was awash with festive colours of Holi. Qureshi said, “This is a sad time for me and for the city, hence I am depicting this eternal cycle of life and death.”

The retail store Republic had a strong show as designer Omar Farooq experimented with colours like lavender, burnished reds and oranges to push the boundaries of menswear in his collection.

But while one retailer shone, the others fell flat. Nayna showed a confused collection which was purportedly based on the pashmina but hardly showed any. Rano’s Heirlooms didn’t deliver the gilded splendour expected from a label that creates exquisite traditional wear.

Fahad Hussayn seemed to have lost his touch with his all-white collection, which were wearable but lacked in creativity. The chains were an interesting addition, but why include a corset on a sari, or a bustier gown? But Hussayn seems to know what has worked for him commercially — this collection has already been a hit with buyers. The designer told The Express Tribune