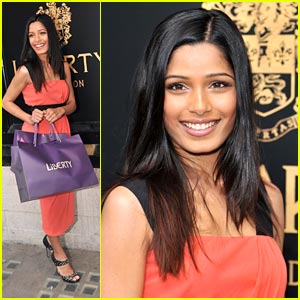 London (PTI): Indian beauty Frieda Pinto is reportedly set to feature as the next Bond girl opposite British hunk Daniel Craig in a 007 film.

The actress, who has received global acclaim for her role as Latika in Danny Boyle’s multiple Oscar-winning film “Slumdog Millionaire” was invited to a screen test for the spy film.

The Mumbai native is a strong favourite for the coveted role as reports suggest that executive producer Barbara Broccoli, who has earmarked “Slumdog Millionaire” director Danny Boyle for the project, is keen to cast Pinto.

The 24-year-old actress was first spotted by the Bond producers during the casting of “Quantum of Solace” but was considered too young at that time, the sun.co.uk reported.

“Freida came to the attention of the Bond team when they were casting Quantum of Solace. She was too young at the time to have a part as a love interest for a secret agent. But she has blossomed into an incredibly stunning young woman and would look perfect on Daniel Craig’s arm,” a source told the newspaper.

“Danny Boyle is favourite to take the helm of the next movie, which would increase Freida’s chances of a starring role,” the source added.