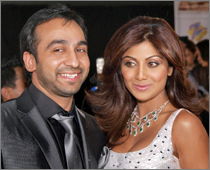 Besides cricket and yoga, there’s something else too that’s keeping Bollywood’s hottie Shilpa Shetty busy these days. That is none other than her man Raj Kundra.

If reports are to be believed then the sultry actress is soon going to tie the knot with her long time boyfriend and business partner Raj by yearend.

Apparently Raj had proposed to the sexy actress Valentine’s Day this year with a diamond ring. The actress had later claimed that she was least expecting it but she was very excited about it. She however said that she will enter the wed lock only by the year end due to prior commitments.

Shilpa and Raj, co-owners of Rajasthan Royals, are busy promoting for the upcoming season of the Indian Premier League. The couple has also spent more than a crore for a promotional music video.

At present Shilpa is busy winding up her movies The Man and The Desire. Let’s wait what Shilpa has in store for her fans.