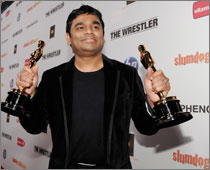 The super success of Oscar winner Slumdog Millionaire has been so overwheming that the lucky pair of Danny Boyle and A R Rahman are being flooded with offers.

Grapevine has it that Danny Boyle has been asked to direct James Bond’s 23rd film. And since Rahman composed such great music for Slumdog Millionaire, it might just be that the music maestro also gets roped in for the project.

According to unconfirmed reports, Barbara Broccoli, producer of the next James Bond film has approached Danny Boyle for the project.

“Danny’s intense involvement with the motifs he drops on his script papers is unbeatable by any of the contemporary filmmakers. For sure, he would offer a new-dimensioned James Bond and it s something about turning spotlights of the entire globe if Danny is there in Bonds family,” says a source.

While rumours may be running rife about Rahman being a part of the Bond project, one thing is certain – if Rahman does it, the next James Bond soundtrack would surely be a super duper hit. Jai Ho!