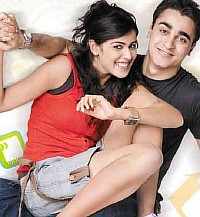 Abbas Tyrewala’s Jaane Tu… Ya Jaane Na bestowed Genelia D’Souza with all that an actress could wish for.

But, that’s not all; he will soon be making a sequel to the teenybopper film. Giving us a peak into the film, Abbas Tyrewala says, “It starts with Jai (Imran Khan) and Aditi (Genelia D’Souza) having problems in their marriage. They are on the verge of a divorce after Jai ends up drunk and having a onenight-stand.”

This validates Genelia’s participation in the sequel and she is on cloud nine. “A film like Jaane Tu doesn’t happen every day,” says Genelia, “It fell into my lap by chance. All of us in Jaane Tu have got busy. Everyone went their way. I’ve been working round the clock on my films and endorsements. But whenever I meet Abbas or Imran, we feel the same warmth that we felt during the making of the film. It would be fun for the whole team to be reunited.”

However, Jaane Tu’s other gifted supporting players who played Imran and Genelia’s college friends haven’t found a single significant offer in Bollywood. But Genelia is past all this. “I haven’t been sitting at home waiting for the sequel to happen. Now, I have almost finished two other films: Its My Life with Harman Baweja and Life Partner opposite Fardeen Khan. Also, I’ve just begun shooting for David Dhawan’s Hook Ya Crook where I play a lawyer, which is the only prominent female character in the film.”

Abbas has said that it was a conscious decision to not make Jaane Tu’s sequel immediately because he wanted to let the characters mature in his mind. He will focus his attention on the sequel after finishing 1-800-Love, which features his wife Pakhi and John Abraham and will go on the floors next month in London.