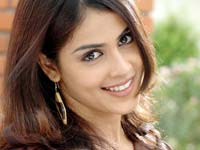 Rani Mukherjee and Preity Zinta are getting old. Unlike smart cookie Aishwarya who’s still getting the best of films, these two have restricted themselves to different roles (of course because of a lack of offers).

It’s worse for ‘once upon a time queen of hearts’ Rani Mukherjee who made the major mistake of confining herself to the Yash Raj camp and has hardly any good role to talk about. Except of course about her dear Aditya Chopra’s films.

She is losing endorsements to younger actresses left, right and centre and so is Preity. Their loss has turned out to be somebody else’s gain. After the success of Jaane Tu Ya Jaane Na, Genelia D’ Souza has found her feet back in Bollywood.

Genelia had moved to South when she failed to make a mark in Bollywood with her first film Tujhe Meri Kasam with rumoured boyfriend Riteish Deshmukh. Masti did nothing to her either. But now things have changed. Apart from big offers, movies with John Abraham and good filmmakers, she has become a hot favourite in the ad world as well.

The cute and petite Genelia has ad makers fighting it out for her. She is endorsing products that our ‘A-league’ Bollywood actresses once used to endorse. This includes Rani and Preity. Genelia is now the face of brands like Vatika hair oil and Fair and Lovely. After replacing Rani in the Fanta commercial, Genelia has now replaced Bollywood’s bubbly Zinta in the Cadbury Perk commercial.

Genie baby is clearly a young face and is great in-demand. Rani and Preity and the ilk have a lot to worry about.