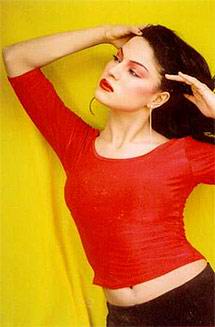 Happy because her first India-Pakistan multi-star film in Punjabi – “Pind Di Kudi” (village girl) – is complete and ready for release.

Proud because she has now been chosen to act opposite Pakistan film industry’s superstar Shaan in a Pakistani Punjabi film.

Being the first actress from India to be signed for a film in Pakistan, Sheeba has her plans worked out. “The shooting starts after Nov 14 and the schedule would be over in one month flat,” she said here Monday.

Sheeba understands the responsibility on her shoulders for the Pakistani film has been titled “Bade Chaudhary”.

“I want to do well and be recognised as a good actor on both sides of the border. Pakistani actors have a solid theatre background and are quite talented. It would be nice to work with them. Shaan enjoys the status in Pakistani film industry that Amitabh Bachchan has in Bollywood,” she pointed out.

Besides “Pind Di Kudi” that she has just completed, Sheeba has acted in a few Bollywood films as well.

One of these was “Yeh Kaisi Mohabbat” opposite Abhishek. Though living in Mumbai, Sheeba has a strong Punjab connection as her father and other relatives were associated with the Punjabi film industry here. “We belong to Jalandhar district,” she said.

Sheeba said it was great to work in a India-Pakistan joint production with actors from across the border. She particularly praised Veena Malik, the Punjabi heroine from Pakistan who co-starred with her and hero Sarbjeet Cheema in “Pind Di Kudi”.

The Pakistani actress incidentally had an Indian name – Veena (a musical instrument). “Pind Di Kudi” was also the first foray in films by Sarbjeet Cheema – an accomplished Punjabi singer.

Sarbjeet has sung three songs in the film.

He said it was great to work with two heroines at the same time – one from Pakistan (Veena) and one from India (Sheeba).

Producer Iqbal Dhillon said that “Pind Di Kudi” was complete in most aspects.

“Only a few shots would be taken in Pakistan to give it a cross-border touch,” he added.

The film was directed by Sukhwant Dhadda. The music of the film was released early October.

“Pind Di Kudi” cost nearly Rs.25 million and was completed within five months after being launched as the first India-Pakistan joint production.

Indian government liberally gave visas for Pakistani actors and other artistes when they came over several times for shooting. The film was shot in and around Chandigarh and some parts of Indian Punjab.