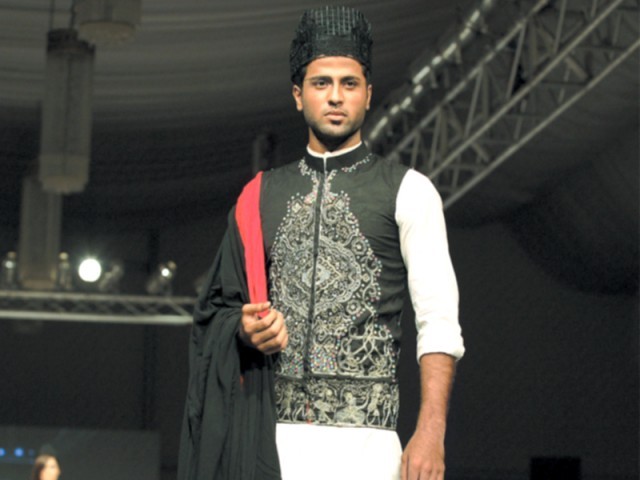 The second day of the Karachi Fashion Week was laced with glaring disappointments and obvious fashion faux pas on the ramp. While there was diversity — from Nina Ajmal’s tie-and-dye tops to Zara’s Bermuda shorts — the event was marred by mistakes made earlier. If the day was saved, it was only because of fashion designers Syed Rizwanullah and Nadya Mistry.

Zara’s Spring/Summer collection 2012 saw a deep loyalty to the brand’s signature style and stuck to trendy and sporty clothes — the look Zara is famous for at the international level as well. The men’s range saw Bermuda shorts in floral prints, cargo pants and flip-flops, while the women’s line created a stir with mini-skirts and high-heels.

Unfortunately, the young lot of Indus Higher School failed to impress on the ramp. In a collection of western-styled outfits for men, turbans don’t stand a chance.  Similarly, motifs of wish bones and human skulls don’t seem to have mass appeal either. Meanwhile, in the women’s line, the concept of scissors hanging on cocktail dresses was another fashion no-no.

Nina Ajmal made her debut on the ramp with a casual collection comprising of tie-and-dye tops. However, one couldn’t help but wonder why the designer chose to show gold, shimmery shalwars. Overall, the collection failed to excite with most of the outfits looking identical.

Nadya Mistry’s ode to late singer Amy Winehouse’s philosophy of style was definitely unique and creative, but this can only be said about the western outfits she offered. Mistry, the French-trained designer, paid tribute to the late singer in her collection titled ‘Amy’, and her models had the ‘Winehouse look’ — with everything from the beehive hairdo to the dramatic eye make-up.

However, Mistry’s decision to have an eastern collection around the same theme backfired as it failed to live up to the expectations of the crowd.

Mateen Ahmed Khan’s menswear collection, a fusion of 1970s and 1980s era saw safari suits with motifs from the Mughal era. The creations, with shades of blue and whites, ended up looking repetitive.

Rizwanullah is known to make a splash and he did exactly that with his collection at KFW, where the audience was stunned to see a male model walking the ramp in his underwear. However, notice must be given the rest of the designer’s collection which saved the night.

Rizwanullah’s ‘Black’ collection was striking with the designer using black offset with vibrant embroidery. While the creations were bold and funky, the embroidery definitely had a hint of traditional Pakistan. The designer had his wife, model Fayezah Ansari, walk the ramp in a long flowing, backless black gown which won resounding applause by the audience.