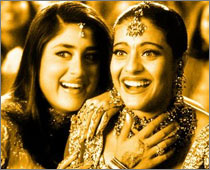 Karan Johar is on a nostalgia trip – the nostalgia for success. In an attempt to recreate the success of his blockbuster Kabhi Khushi Kabhie Gham, Karan has cast Kajol and Kareena together for his next venture after My Name is Khan.

Reports say that Kajol and Kareena, who played sisters in Kabhi Khushi Kabhie Gham, have been finalised by Karan Johar, and will start shooting for the film once their current projects are over.

The film, which is yet untitled, will be directed by first time director Siddharth Malhotra, who produced the popular TV show Sanjivani.

Reports also say that the film will be based on the hit Hollywood movie Stepmom that starred Susan Sarandon and Julia Roberts.

What isn’t clear is who will be the leading man in the film, and how closely Karan has adopted Stepmom. Will SRK play the lead as he usually does in KJo films?

This report proves that the alleged tiff between Kajol and Karan Johar regarding shooting in New York for MY Name is Khan has been resolved. The issue at hand was that Karan wanted Kajol to travel to New York to shoot a scene, but she didn’t want to leave her daughter Nyasa while her school term was going on.