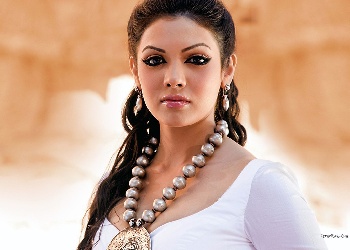 At a time when Lollywood isn’t producing any major films, many Pakistani stars are trying their luck in Bollywood.

Ali Zafar, Meera, Veena Malik and Rahat Ali Khan are continuously pursuing different projects in India, and now its model-turned-actor Mona Liza who is eyeing a career in Bollywood. Mona Liza, whose first film Kajraare (in which she starred opposite Himesh Reshammiya) was released without much hype by producer Bhushan Kumar, says she had been treated well in Bollywood and the silent release of one film won’t stop her from doing new ventures.

“I have recently come back from India, and several things are in the pipeline. I won’t reveal the projects right now, but in July I will announce my new film properly in India. Currently, I am waiting for my TV projects to complete. Right now two of my dramas are on air from private TV channels, and they will be my last projects for TV. I am going to India in July again for a longer period and will focus on my film career,” Mona Lizza told The Express Tribune.

Mona Lizza has also worked in a Pakistani film named Saltanat which is yet to be released. The film was scheduled to hit cinemas in October last year, however it’s release was postponed for certain reasons. When asked if she plans to do some Pakistani films she said, “Lollywood isn’t producing any major films. It has come to a standing halt. However, much work is being done on television drama serials. I have worked on the small screen and enjoyed doing it, but now I want to focus on films. I had some offers from India, but I was looking for the right kind of offer. I didn’t want to work in Bollywood just for the sake of appearance. I wanted to do a strong script-based role and now is the time to go for it. I have offers and am going to avail them.”

When asked how our film industry could come back on track she replied: “I think that first of all, our film industry should unite and people should work with dedication. We cannot work any wonders unless we get over the divisions within our industry. Talent isn’t a problem in this country. We have many good stories to tell. All we have to do is find those stories, and execute them well to make good films. Small budget movies can at least break the inertia. We should now break the stereotypical approach towards cinema and make some original things that people can relate to.”