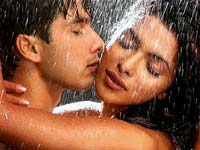 Shahid Kapoor’s misadventure with love seems to continue. After being dumped by Kareena Kapoor after a relationship that had lasted for four year, Shahid has had another heartbreak with Priyanka Chopra parting ways with him. Ironically this comes as a shock for the Ishq Vishq star as he had started dating Priyanka only a few months back and the former Miss World hadn’t even publicly acknowledged there relationship.

Buzz up!
There are rumours that Shahid’s over possessiveness seemed to have triggered Priyanka to call off the relationship. He seems to having problems with her entire lifestyle. He had asked her to stop partying and not consume alcohol. Gerard Butler’s proposal to her also created tension between the couple. Priyanka Chopra who has been an independent woman all her life could not take Shahid’s diktats anymore and finally made up her mind.

Interestingly Kareena Kapoor had called off her relationship with Shahid for similar reasons. Shahid had forced Kareena to turn vegetarian since he was one and did allow her to mingle with other Bollywood stars. Well Shahid might be the heartthrob of the entire nation but when it comes to handling tinsel town women he seems to be a greenhorn.