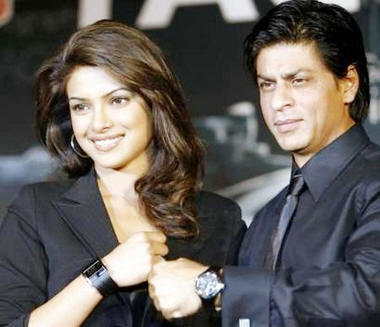 Shah Rukh has been taking more than a passing interest in the music for the films he produces. And Priyanka Chopra would vouch for that. If she declares from rooftops that she is Shah Rukh Khan’s biggest fan then it sure has a reason. The man just floors his ladies, without trying to be be charming.

What he did for Priyanka Chopra in Billu Barbar would certify as pure magnanimity and generosity, both as a considerate co-star and producer. Shah Rukh decided to give away a large portion of his duet in Billu Barbar to Priyanka. Says the film’s excited music composer Pritam Chakraborty, “Shah Rukh took very close interest in each one of the songs. He isn’t a musician. But he has an instinctive ear for music. It takes him just a few seconds to approve or cut down a track.”

With the songs meant for Kareena Kapoor and Deepika Padukone, Pritam faced no problems. “Shah Rukh loved his songs with Kareena ‘Marjana’ and Deepika ‘Love mera hit hit’. They were straight-forward dance songs with shared grooves between Shah Rukh and Kareena/Deepika.”

The Priyanka song needed special treatment. And Shah Rukh made Pritam re-work and re-record the song.

Divulges Pritam, “Shah Rukh’s song with Priyanka Khuda-ae-kher is not an item song. It’s a love ballad that the pair playing Bollywood superstars, emote to in front of the camera. Being a love song Shah Rukh felt there wasn’t enough of the female presemce in the vocals. He made me re-record the song with more for the female vocalist (Dominique) to do since he wanted Priyanka to have an equal number of lines.”

Irrfan Khan and Lara Dutta who play a rustic couple will later be seen enacting the same Shah Rukh-Priyanka ballad exactly the way the village couple had seen the stars do the song.

From sharing Akshay Kumar on screen in Andaaz to sharing the same love song, the Priyanka-Lara Dutta rivalry sure has come a long way.

When told about Shah Rukh’s gesture, Priyanka stays silent for a while. She then sighs and says, “What do I say? Now do you know why he’s my favourite?”

1 thought on “Thank You Priyanka, Shah Rukh Finds A Unique Way Of Showing His Gratitude”