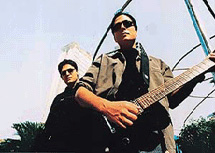 As a six- year-old I could hardly understand music. But there was one tune, which I still remember humming in my class when I was in grade one. The song had a distinctly catchy tune and had taken the Pakistani Pop scene by storm. It started off as Sar kiye yeh pahar. Then suddenly the band who sang this song vanished. And when after eight years the Strings launched their smash hit album called Duur I realized that they were the same guys whose tunes infused a craze of music in me at a very young age.

After receiving loads and loads of laurels and plaudits for their last release the duo is back in the spotlight. Dhaani is their latest offering and they seem to have a great deal of expectations with this album.Meet Bilal Maqsood and Faisal Kapadia, better known as Strings, as they narrate their whole musical journey and talk about the sheer hard work that has made them who they are today.

Clad in extremely casual attire and with an attitude of the guy next door they comfortably wait for me to start the chat.

They go down memory lane and reveal that a passion for music was there in them since their childhood and when the duo met each other in college they thought they can compose music if they combine their talents.

How did they keep a balance between their studies and music?

Music was just a hobby at that time. It was nothing more than just a break from the tough schedule at the college. They released their first album when they were still in college and since then have come a long way and their music has evolved over the years, too.

“Now we are composing music with a completely different attitude. Music is our profession now. Back in college it was just a passion. We are more concerned and focused in our music now because we know that we and our families are dependent on it.” Other than being professional the duo also have a different approach towards music now. They are more educated, experienced and have a lot more exposure, which enables them to innovate and bring out new ideas and also promote their music in a highly professional way.

Has Bilal’s work experience in an advertising agency benefited the band in the marketing of their albums?

“Yes, definitely, I have the required experience in chalking out different strategies through which we can publicize our music as much as possible,” says the experienced singer.

So what is Dhaani all about?

According to Bilal, Dhaani is directly related to nature if you closely go through its lyrics. But this was not planned. It just happened as a coincidence. The lyrics have many references to nature such as in the title track one constantly hears words like badal, nadiya and more. Also when the duo were composing the tunes in Murree for about a month they were more exposed to the exotic beauty of the Northern areas and that gave them the idea of having green patches and open skies on the album cover. That’s how Dhaani took its final shape.

Does this album have anything new to offer?

Musically, Strings have mostly been on the romantic side. In this album, too, there is the typical ‘Stringish’ romantic feel. Though the album doesn’t completely fall into one particular genre, Strings maintain that other than slight changes they have retained their signature sound in the album. “You have the same processed electronic sound with a major use of drum sequences and the rock element. Yes, we have experimented with melodies in some of the songs so that the listeners don’t get the same taste which they have experienced in our earlier album,” the duo explained.

“We do not finalize the tune of any song until and unless we are satisfied with it. Everything may seem to be fine with the melody but there is something that fails to give us the inner contentment. It might seem that something is missing. As soon as we overcome this stage we start recording the songs. So, it’s certainly not a piece of cake. We have to make sure that the final product reflects our utmost hard work” says Faisal Kapadia.

How did Duur come to be such a major hit in India?

At the time of the release of Duur, Strings didn’t know that they were already a name in India. Their all time hit Sar kiye yeh pahar had been played in a number of clubs in India in some remix versions. This helped them in releasing their album simultaneously in India through one of the well-known labels very easily. The album was an instant hit there as the people recalled the duo as the Sar kiye yeh pahar guys.

Now, their latest album also includes one track recorded with the veteran Indian singer Hari Haran. “The idea of doing a song with Hari Haran came to us very abruptly. We were just sitting one day and a thought struck us from nowhere that why not rope in Hari Haran for the Bolo Bolo as we were a great fan of him. We called him and discussed our idea and he agreed instantly!” Hari Haran also liked Strings’ melodies earlier and thought that they were “melodic in the compositions with interesting riffs and tasteful arrangements, their singing is simple and effective”.

The song has a thumri element in it, which is an ancient form of Indian classical music. Combining it with Strings’ modern rhythms the track is awesome. “We have experimented with the tune in this track and this is one of the major highlights of the album. We will be shooting its video shortly in Dubai. The video, which will be featuring Hari Haran along with them, will portray the amazing ease with which people from both India and Pakistan live in Dubai. We will be shown just having a quality time with those people singing around beaches, etc”.

Talking about the pivotal role which music videos play in the success of an album, Faisal points out that unless and until the video is visually appealing a person will switch the channel no matter how well the song is composed. The aim is to provide a viewer with both quality video and audio when he sits in front of the tube. That’s how the person would remember the song when he hears it on audio players or in concerts.

Their recent video Chaye Chaye is sizzling up the tube these days with its glossy outlook. Directed by Jami the video is a little puzzling at places.

So what is the main idea behind that video?

Bilal answers this one saying, “The video shows us being arrested by an FBI agent. We try telling him through our song that the actual crime is committed by a girl, who with the help of her glitz and glamour, causes a rift amongst people wherever she goes”.

So is this Strings’ idea or Jami’s?

“We leave everything on the director because it is his job and he knows it best,” say the duo.

According to Faisal, the present media boom is a healthy sign for Pakistani music. Few years back people had very different viewpoints for Pakistani music, which was quite obvious, now slowly and gradually they have started listening to Pakistani music and these new channels seem to have revamped the music industry.

But the negative impact of this boom is that anyone who can play a guitar is appearing on the charts and the number of singers regardless of their singing talents is growing like mushrooms.

Bilal instantly replies, “I think history is repeating itself. Back in 1989-92 the situation was the same. There was only one newly introduced music channel and a lot of people who could sing and produce videos started pouring in on the scene. But only those survived who really deserved to stay and had the potential of carrying themselves ahead. Today, there may be an excess of singers aiming to make it big but they will not stay here for a long time if they do not do something new.” Well, it sounds more like a jungle rule: ‘Survival of the fittest’.

So what do they think about the new talent?

According to Bilal, Fuzon is definitely amazing and Noori falls in the same category. Whereas the lead singer of Aaroh reflects enormous potential. EP is also emerging as a promising band.

Strings fame is not just confined to Pakistan but it has also reached other parts of the world. Today, they are recognized as one of the best bands of the sub-continent. Their music has promoted a positive image of our country by crossing different boundaries. They seem to be at their peak now and who knows their future may be even brighter.