Following the well attended Sindh festival now comes in the Karakoram festival which was not only entertaining but informative to the residents of Karachi. You! takes a look at the five day long festivities…

Each and every country has its own distinctive culture. Many countries have cultural diversity within the nations distinguishing from neighboring states. The strength of a nation, particularly a nation like Pakistan lies in its culture, traditions and ethnicity, differentiating one province from another. Sadly the people living in this country themselves are deprived of the richness of various existing cultures that need to be accepted, respected and promoted. This is not only about the economics of tourism the knowledge of the very concept brings in a collective sense of pride to the nation.

The best way to know and enjoy any culture is to experience it first-hand in its environment but for the ones who can’t, it is surely a blessing to have different events and festivals promoting our traditional background.

Recently, a five day long festival was held in Park Towers honouring the rich Karakoram culture. This was done by presenting different aesthetics of the region including performing arts and clothes, giving us Karachiites a taste of all that we are missing. The Karakoram festival was being held for the second time and hopefully will continue to be celebrated years to come so that the new generation stays in touch with the roots of the Pakistani culture.

Park Towers on the whole was decorated in a traditional way beginning with the entrance. Great effort was made to transform the modern shopping mall into a doorway to the Northern Karakoram area. The entrance had decoration pieces of animals found in that area such as the mountain deer, peacocks and parrots. One could also see stalls of ethnic clothes and dry fruits. One special stall and by far the most creative one was of the Afghan onyx marble, where decoration pieces of marbles were carved in the shape of different animals. 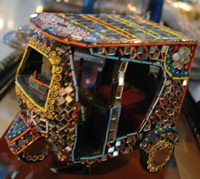 The most popular stall amongst all was the ladies stall with shawls, the most widely demanded being the Pashmina shawls from Kashmir. These shawls are known for their warmth and good quality the ones available at the festival were expensive but classy. Different styles of Pashmina were available depending on the preference of the buyer such as shawls with embroidery, flowery designs, handwork, needle work and hook work. Also available were unstitched suits, cushions and pillow covers.

Exquisite jewellery of the Northern areas being sold was traditional yet funky comprising earring, necklaces and bangles.

The collectors’ items which one can easily place in a drawing room include ancient knives, swords, carpets and antique mirrors. Adding spice to the festival were the different traditional dance performances and live folk music. Hanza Nagar, Chitral, Tajik and Gilgit are the various dances of the Karakoram area and were much loved and enjoyed by the spectators as the performances were welcomed by a round of applause. Agreed people are too occupied with their own lives to focus on searching for our hidden culture but festivals like these create awareness and the people who were attending the mall just for the sake of shopping instinctively became a part of the event. All in all the event was entertaining and a good learning experience to those who do not know much about our culture.