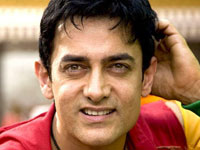 The Reigning Khan of Bollywood- Aamir Khan recently appeared on the show called ‘Talk Asia’ for CNN with host Anjali Rao in front of a live audience. The actor who of late has been very media-savvy spoke at length on topics as diverse as his on-going war of words with Shahrukh Khan to the terror attacks that devastated Mumbai on 26/11 last year.

Post the stupendous success of his last film Ghajini, Aamir is being termed as the new ‘King Khan’ of Bollywood. Commenting on this, the actor said, “I had absolutely no intention of kicking Shahrukh off his pedestal. Though I have to say, I don’t think, he ever was on it. In my opinion, the actor who I really look up to is Mr. Amitabh Bachchan. He is someone who’s work I really liked, a fantastic actor & the kind of stardom Mr. Bachchan has seen, none of us can ever hope to see.”

He also shared what he felt about Ghajini breaking all kinds of records and emerging as the highest grossing Bollywood film of all time. “You can never really tell how a film is going to perform until you see the film with the audience. For me what is important is that when I see the film once it is ready, has it turned out the way we wanted it to? If we have done that, then that makes me feel happy.”

The actor also expressed his views on the much talked about Oscar winning film Slumdog Millionaire. “I thought the movie was well intended. It was a very sincere attempt, but it didn’t touch me personally, and I suspect its because, I’m not used to watching Indians speak English, all these slum kids talking in English… it’s strange.”

Finally the actor got emotional while sharing his thoughts on the ghastly 26/11 Mumbai terror attacks. “It was really devastating. It was like a nightmare, I could not believe it. It was shocking to see the audacity with which these attacks were carried out.” You can catch this entire episode on CNN on Wednesday, March 25, at 1800hrs IST with a repeat telecast on Saturday, March 28, at 1000hrs, 2000hrs IST.