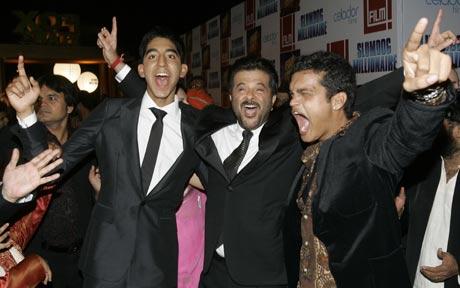 London (IANS): Indian-origin British actor Dev Patel won the loudest cheer from fans as he walked up the red carpet for the Bafta awards ceremony.

The “Slumdog Millionaire” actor, who comes from an ordinary family in the London suburb of Harrow, received a deafening welcome from fans when he joined the red carpet at the Royal Opera House on Sunday night, Sky News reported.

The cheers were louder than those for Hollywood stars Angelina Jolie and Brad Pitt. But Dev, 18, told Sky he was yet to perfect his showbiz smile, saying: “I haven’t got anything down to a tee yet, I just look baffled.”

“I’m a British boy, from Harrow, so it’s nice to get local support,” he added. Patel, who lost the Bafta lead actor award to Mikey Rourke for “The Wrestler”, was overwhelmed with his nomination that also pitted him against Brad Pitt. “Those guys are just amazing actors, I’ve been watching them since before I ever contemplated acting,” the newcomer said.

‘Slumdog Millionaire’ director Danny Boyle told Sky: “I’ve learnt a lot about the film from audiences. I didn’t realise this film is really the Rocky story – a kid from nowhere makes it, and it is not about money or success, it’s about a girl in the end.”