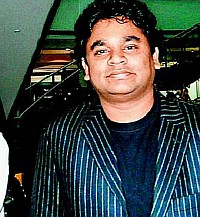 India is expecting A R Rahman to bring home the Oscar. No wonder he is nervous

In the wake of Slumdog Millionaire, AR Rahman’s triumphant streak continues. And how!
This week, he walked away with the prestigious BAFTA (British Academy of Film & Television Arts) awards for his music in Slumdog Millionaire.
An exhausted but exhilarated Rahman said from London, “It came as surprise, not because I didn’t expect it but, because it was announced too soon. Mine was one of the first awards to be announced. I got it from one of my favourite international artistes Kylie Minogue. That was pretty cool.”
Yesterday, Rahman returned from London to Chennai for just a day especially so that he could take his wife, Saira Bano to Los Angeles for the Oscars.
“More than mine, it’s my wife’s dream that I get an Oscar,” said Rahman.
But everything isn’t a cakewalk for Rahman. He is under tremendous pressure to bring home the Oscar. “I feel like one of our sportspersons at the Olympics who is being told to bring home a gold medal. I hope I don’t let people in India who are expecting me to win the Oscar down. God has already given me much more than I ever expected. I have very low expectations from my nomination at the Oscars. Maybe that’s the kind of person I am,” he said cautiously.