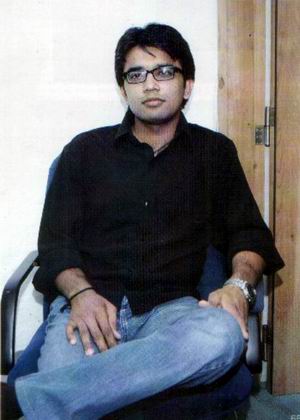 A director renowned for lending unusual comic touches to his programmes, Rana Rizwan has made a name for himself in a short span of time. Fashion Collection chats with this talented young man to get to know the mind behind the wry sense of humor.

You have directed some highly successful music shows, sitcoms and magazine shows-what have you enjoyed the most?

My personality is such that I love doing programmes that are light in nature. As such, all my projects, even magazine shows, have been of a non-serious kind and so I have enjoyed doing them all. Whenever I am asked to do a programme, I try to bring my own concept to it, so that it invariably becomes something I would like to do and am comfortable doing. I have never done something that I wasn’t interested in. But, I do appreciate that I will eventually have to steer away from just light work otherwise I will not be taken seriously. Here unfortunately, unlike abroad, where comedy is considered difficult to do because timing has to be immaculate, you are not acclaimed as a director if you only concentrate on humor.

How did you get into direction? Did you have an art-related background?

Well, I did my Bcom initially. But, after that I did a four-year advertising course from Studio Art, majoring in Communication Design. I passed with distinctions and then hopped from one advertising agency to another, until I eventually decided that I wasn’t going anywhere in these firms, so started my own small agency in partnership with a friend. We were doing quite well, and competing with some of the top agencies, but had to close shop because of financial constraints. Then Yasir Nawaz, who is a childhood friend of mine, coerced me to get into direction, so here I am. Most of what I have learned is thanks to him-other than the couple of months I spent observing Mehrin Jabbar in action – and most of my projects have been with Yaseer.

Considering soaps are becoming so popular, how is it that you haven’t tried your hand at them yet?

I’m afraid of getting into a programme that goes on for a long time as I feel I won’t be able to sustain it for such a prolonged period or for that matter, continue to think on the same lines for so long. Also, soaps are mostly on women-oriented issues, and that’s not my cup of tea at all. I feel it’s more fun to do tele-plays or long plays.

But you’re doing a serial ‘Love Marriage’ for Hum TV, which is supposed to be a women oriented channel. So aren’t you already working with subjects that have to do with women?

A-Actually, the problem with soaps is that everything is exaggerated in them, Women are shown getting up from their sleep in full make-up and with their hair blow-dried. I can’t show such things when ‘Love Marriage’, which is a light, romantic serial, goes on air, you’ll see how reality-based it is. People will be able to relate to the sequences.

Are you working on any other project currently?

I am doing an interview programme called ‘Casual’ for Moomal Productions. It’s a very different kind of programme, for the questions asked in it are not your run-of-the-mill ones. In fact, they are often the reverse of what is generally asked. For instance, instead of asking interviewees how they launched their career, in this show, they are asked when they plan to end it? It’s an unusual concept and in the 25-minute programme, all the subjects discussed are those that are normally never touched upon in interviews. I firmly feel that every programme, no matter how small, should have some unique element in it.

Your hallmark seems to be shows with a difference. Didn’t you also launch your career with a show that had quite a unique concept?

Yes, it was a 25-minute interview programme, but was conducted entirely on the telephone. It was called ‘Line One’ and the host of the programme was also the guest celebrity of the show. This was a completely new concept, which I had done for Sultana Siddiqui, and it was only after that the other channels also started to cash in on telephones in their shows.

Why do you think your sitcom ‘Aik or aik do’ failed to make its mark?

Actually, the sitcom was more on the lines of hard-core, black humour. The plays focused on grim situations in which the actors all performed seriously but the scenarios would be funny. I knew people would not understand it, and I think locally only sponsors saw the programme because I never got a feedback from the audience, but that was one serial I had been keen to do. It is currently being re-shown in India.

Let’s ask you one of your twisted questions. When are you planning on leaving this field?

The day I am made to do a programme that I didn’t want to do and it turns out to be a bad one, I’ll leave the field. For, if I have to do something just to follow someone else’s wishes, and it gives me no satisfaction, then I might as well be an accountant—I shouldn’t be a director. ‘Aik or aik do’ might not have been appreciated, but it gives me great satisfaction that I did it, and that’s how I wish to work.

Are you thinking of diversifying your work like going into acting, maybe-or will you stick to direction?

I am extremely camera-shy, so there is no question of my appearing in front of the camera. The only time I get my photographs taken, even for interviews, is when Yasir gets hold of a photographer and forcefully gets me to pose for him!

Any ambitious plans for the future?

No. I have no intention of changing Pakistan! I recently heard an interview of a famous cricketer on the radio and he claimed that his aim was to change Pakistan by making one movie. I get amazed by such comments. If it was that easy to change Pakistan, all leaders would be making movies. But, I do want to keep growing and changing my goals as I grow. Ultimately though, I would like to make a movie when I feel I am ready for it. I have got a lot of offers for making music videos, but am still not mentally prepared for them. I want to learn more before I try my hand at them.

Why should you be so hesitant in making music videos when you have successfully handled such a variety of programmes?

I always like to observe and learn, before venturing into anything. Having worked in advertising agencies, I know how difficult it is to communicate an idea in a thirty second ad. So similarly, to make a three-minute video with a certain concept is a difficult task, and needs to be properly executed.

Any other projects in the offing?

Yes, A sitcom for Moomal Productions, which I also guarantee will be very different.