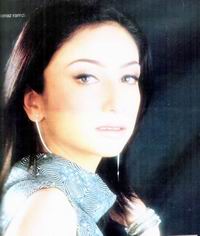 Loving every minute of the fame and fortunes that have come so early to her in life, Anoushey Ashraf is geared to meet new challenges and make her mark in the world of show-biz. The youngest presenter to have been selected for the Lux Style Awards held in Dubai last year, she is going places with her bubbly personality and touch of panache. She shares her glories and dreams with Fashion Collection.

How did it feel being the youngest presenter at the LSA last year?

It was quite an honor for me being there with the cream of the industry, and I had a great time.

Did you have to pull strings to get invited?

Not at all. Just the day before I got the invitation I was chatting with my best friend Shallum and he was mentioning that they were going to perform for the ceremony. I mentioned that maybe next year if I’ve achieved something great in life, I’ll get invited, and the very next day I get a call of invitation from Friehal I couldn’t believe it and felt overwhelmed.

You’ve started so early with your career that did you complete your higher studies?

Well, I was doing my A levels privately and decided to take up some kind of regular activity to keep myself occupied. So I went to Indus in the hope of becoming a newscaster, only to discover that they found me too young to fill the position. I was told though, that Indus Music had just been launched and I could try my hand as a VJ instead. At that time there were no female VJ’s and I became popular. I enjoyed myself so much that I continued even while I was studying for my BA in English Literature.

So you aren’t planning on pursuing your studies further?

I think it’s tragic that there are no local schools in film-making or acting, etc. for those who may want to properly learn these arts. I knew what career I wanted to adopt while I was still doing my A Levels, but there is no institute that could hone my skills. Indus was like a school we never had, and we learnt everything from lighting to editing there. It was a really good experience. I would have loved to have gone abroad to learn film-making but there is so much happening here and I am so excited with the current scene that I don’t want to miss out on anything. I might go to India, though at some stage. It is not far away and it would be easy to do short courses there. My friend is learning production from a school of Delhi and I feel that for us it is better to learn from there that from Hollywood as the Indian industry and public is similar to ours. We could learn more stuff there that would be useful to us here.

Do you know that there is an Academy that teaches film-making in Karachi?

No,I didn’t know. But unless there are experienced professionals like Sultana Siddiqui, Saira Kazmi, Rahat Kazmi and Ghazanfar Ali teaching there and the institute is prestigious, I don’t think it will attract many students and inspire confidence.

Why had you left Indus recently when you were so happy with it?

I had a three year contract and after my contract expired and they wanted me to re-new it, I was not keen because it meant not working for anyone else. I felt it was time for me to try newer pastures. Ultimately, we came to an understanding so that I am not bound to work for just them and am now VJ-ing for them as well as appearing on other channels.

What are you doing for the other channels?

Well, I’ve already acted in a play for PTV directed by Saira Kazmi a 13-episode serial – in which my role is that of a best friend of the lead, played by Marina Khan. The male lead is Rahat Kazmi. I’m also doing a play for AAJ TV and a travelogue for HUM TV and eventually, I plan on getting into production.

Have you any previous acting experience at all?

None whatsoever. I was always a shy kid and in school never took part in plays or debates because I had stage fright. But at home, I used to enjoy doing my bit when there was no one but my sister watching. That is why I was really nervous when Saira asked me to do the play. Eighty percent of me wanted to do it, and twenty percent would say I can’t, so why am I even bothering?

How was the experience of acting in your first play?

Saira Kazmi is a great director and she was really patient with me. She loves to work with new people and apparently is very happy with the scenes she has edited.

And what kind of a travelogue are you doing?

t’s a mini-travelogue show that I am hosting. We’ve begun with Pakistan and have done Karachi and most of the Punjab, and next month we’ll be going to N.W.F.P. Hopefully, if everything goes well, we’re planning on talking it abroad.

Are you planning on acting in more plays soon?

I have been offered plays, telefilms and even a 300-episode soap on GEO, but so far I’ve not accepted anything. I like to take things slowly and live for the day. I would like to host a talk show, though, something like Oprah Winfrey’s.

What about radio? Aren’t you planning on trying your hand at it?

I’m really excited about radio and the first time I went on air live – on FM 89 for an interview – I was really nervous I have had offers from all time radio stations as my friends Dino and Mani are involved. But, I haven’t been able to decide. I have also been called by Mr. Tahir Khan for the launch of their Radio 1 station, so let’s see what happens. I’ve been avoiding it so far because I feel with all my shooting schedules I might not be able to adhere to the strict code of punctuality that is required for live radio programmes. Both FM 89 and FM 96 wanted me to come in at least thrice a week, and that’s too much for me to handle at this point. Right now my career is being a VJ while being a radio jockey would be a hobby, not a profession. I don’t want to ruin my relationship with everybody and spoil my reputation by taking on more than I can chew.

Lot’s of people think radio is not half as important as far as exposure is concerned but I feel it is becoming really BIG. And they get to go all over Pakistan so it would be great to be part of their team.

Does that mean you might be joining Tahir Khan’s station?

You never know. There are some people you just can’t say NO to, and he is one of them.

Is back-biting common among VJ’s as there is among models?

Mashallah, I get along with everybody I work with and even with the new VJ’s I have a good relationship. But sometimes, I do feel that the newer lot tends to be checking one another out. Generally, though we are good friends and hang out together a lot. We have our own fan following so don’t step on one another’s terrain, as it were, and keep encouraging one another. We all have our own identity and our own shows and are hitting different markets. With models, there is a lot of dirty competition because everyone is on the same ramp, walking the same way and doing the same thing.

Any plans of going into films?

I’m not anti-Lollywood. I’m pro any new thing and good directors that want to make a difference. When IM was launched, music was not regarded that highly and hadn’t received the right exposure. With IM and its right attitude, we made it okay and acceptable. I am sure if movies are handled the right way, they’ll be appreciated too. Even if I don’t act in it. I’d like to be behind the camera and be part of a good Pakistani feature film which is not all about saris and dances. Some of my friends have come from abroad and are very keen on making movies, and I wouldn’t mind working with them at some point.

Wouldn’t your parents have a problem with you acting in movies?

My parents are cool as long as what I am doing is decent. It’s really one and the same thing, whether I am on IM or a TV play or in a movie. It doesn’t make a difference which medium it is.

So any long-term goals?

I’m a very laid-back, happy-go-lucky person. I make my money and spend it on travelling and food and make no investments. I’m having fun and not thinking of the future. My goal is just to be happy. Marriage is not on the cards for the time being either. Everyone keeps telling me I am surrounded by celebrities so how come I am not interested in anyone? As far as I am concerned, all the friends I work with – the celebrities of Pakistan – lose their appeal once their novelty has worn off!