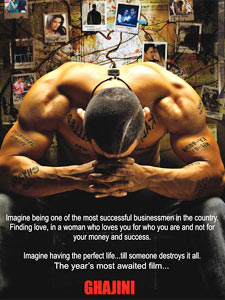 Aamir Khan starrer Ghajini is touted as the big Christmas release, but it has a longer story to tell than is considered healthy for mutilplexes. The action-thriller’s playing time of three hours makes it the second-longest film of the year after Jodhaa Akbar, but the producer is unperturbed.

“It’s not the length. It’s the performance. You could have a really boring two-hour film. On the other hand you could’ve a really gripping film that’s three hours long,” producer Madhu Mantena, who also co-produced the super hit Tamil version of Ghajini with Alu Arvind, said.

The film would have been lengthier by at least five minutes more, says the producer.

“We were thinking of adding theatrical trailers to the feature. That would’ve added five minutes extra to the playing time and good 30 minutes lost during the day at the multiplexes,” Mantena said.

He refutes the charge that the film has an overdose of violence.

“It’s not a tale of violence. It’s a tale of retribution. And at the moment after 26/11 everyone wants answers. Films about retribution are always liked,” said Mantena.

As for the allegation that Ghajini is a remake of Christopher Nolan’s Memento, Mantena said: “There are other Hollywood films on same theme of short term memory loss like Finding Nemo and 50 First Dates. So why single out Memento?”