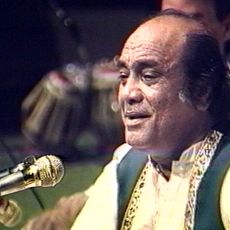 The legendary Singer, King of Ghazal and playback singer for Lollywood, Mehdi Hassan died at age of 85 in Karachi today.

He has been ill for the last 12 years but this year, his condition deteriorated significantly and in the last one month, he was released from hospital for just one day before being admitted again.

Mehdi Hassan was born on 18 July 1927 in a village called Luna in Rajasthan, India into a family of traditional musicians. He claims to be the 16th generation of hereditary musicians hailing from the Kalawant clan of musicians.

Mehdi Hassan had his musical grooming from his father Ustad Azeem Khan and uncle Ustad Ismail Khan who were both traditional Dhrupad singers. Hassan started to perform at a young age and the first concert of dhrupad and kheyal with his elder brother is reported to have been held in Fazilka Bungla[1], near present DC House (1935) of Undivided Punjab. After the Partition of India, 20-year-old Hassan and his family migrated to Pakistan and suffered severe financial hardships.

Despite the hardships, his passion for music didn’t wither and he kept up the routine of practice on a daily basis. The struggle ended when Mehdi Hassan was given the opportunity to sing on Radio Pakistan in 1957, primarily as a thumri singer, which earned him recognition within the musical fraternity. At the time, Ustad Barkat Ali Khan, Begum Akhtar and Mukhtar Begum were considered the stalwarts of ghazal rendition.