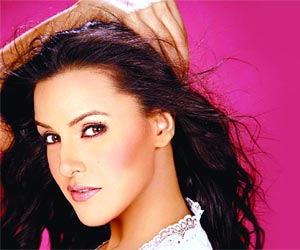 Neha Dhupia recently signed a Hollywood mini- TV series, Bollywood Hero opposite Chris Kattan. Says Neha, “I was very happy when I was offered the role. The whole concept is new and I have never done something like this before.” Probe her a little more and she says, “It is the story of Chris Kattan who comes to India to fulfill his dream of working in a Bollywood film after being rejected by Hollywood. While in India, he encounters cultural differences and a system that is even more severe than what he faced in Hollywood. It also stars Julain Sands and has cameos by Alanis Morissette and others.”

Neha obviously plays a Bollywood heroine, Lalima Lakhani. “ We started shooting from March 1 and since we are shooting in and around Mumbai, I really don’t feel like I am working in a Hollywood project. The film portrays the real essence and earthiness of India.” The shooting wraps up by August and if things go as scheduled the series will air on August 6, 7 and 8.
The Line Producer of Slumdog Millionaire, Tabrez Noorani, who is also working on Bollywood Hero offered the part to Neha. “Tabrez is a friend and when they were looking out for someone, he suggested my name. Later he asked me to give an audition and I got the part.”

Back home, she was reportedly offered season 2 of adventure reality show Fear Factor – Khatron Ke Khiladi on colors. Clarifying it once and for all she says, “Obviously there has been a communication gap and there is absolutely no confirmation or even speculation from my end about being part of Khatron Ke Khiladi.” But she does not rule out the possibility of doing it in the near future. “I really wish that the Indian TV industry also came up with exciting formats. The exposure that you get is much higher than what you get in the Indian TV industry.”

Incidentally, Longinus Fernandes, who choreographed the Oscar-winning song Jai Ho from Slumdog Millionaire is also a part of the project.