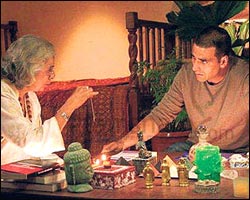 New Delhi (IANS): Nagesh Kukunoor is all praise for Akshay Kumar, who plays the main lead in his first action flick 8×10 Tasveer, describing him as a “no nonsense actor” who would come to the sets on time and do his work without any fuss.

According to Kukunoor, 41, Akshay was an obvious choice for the role of Jai, who has the ability to peek into people’s past.

“The foremost reason to cast Akshay was that he is known for his action films and his stunts. Then I wanted to see him in a role he has not done in the past, precisely the reason why even he got interested in this project,” Kukunoor told IANS over phone from Mumbai.

The thriller revolves around Jai, who has a supernatural gift to see into the past by touching the 8X10 sized photograph of dead people.

“Working with Akshay was terrific. In spite of being a star he is a no-nonsense actor. There were no delays since he would be on the sets on time, work for the requisite hours and go home without any tantrums,” said the director.

Explaining the reason why he chose to direct an action thriller, Kukunoor said: “I like to dabble in different genres; action was one I had not explored till now. Definitely, making an action thriller did have challenges attached to it, but it was equally exciting to make this film. You need a completely different mindset when you make an edgy film like 8×10 Tasveer.”

The director is planning to take a short break before he starts working on post-production of his next film, “Yeh Hausla”.

Kukunoor has two releases this year, “Aashayein” in June and “Yeh Hausla” in August.