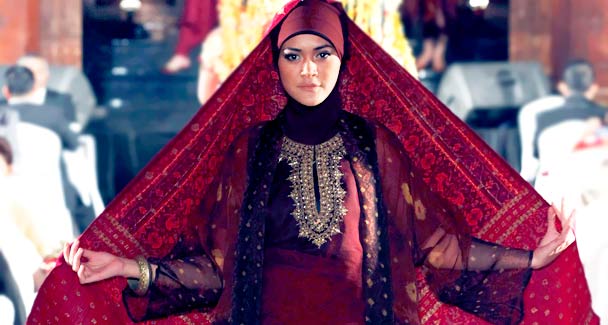 Models presents costumes made from combining traditional batik motifs, antique woven and traditional songket fabric by Indonesian designers Iva Latifa, Ghea Panggabean, Zainal and Ida Royani during the Islamic Fashion Festival in Jakarta. The designers at this fashion show wanted to break with the idea of Muslim fashion being an oxymoron and make it more of a celebration of femininity.

Organized by Rezza, the fashion show was attended by Hollywood celebrities like Oscar winners Charlize Theron and Robert de Niro, as well as socialite Paris Hilton.

According to Rezza and the other designers, the show proved to be quite an eye-opener, as well as a worthy cross-cultural experience for those who were in attendance.

“They were all surprised,” Rezza said. “It was quite different from what they had in mind. They expected Islamic clothing to be all black hijabs, like what they wear in the Middle East. For the first time, they saw something different.”

“Eighty percent of the guests were not Muslims,” Tom added. “But they all enjoyed the show and it was very, very well received.”

At the recently concluded annual Islamic Fashion Festival, the designers reprise their New York success in Jakarta. Malaysian and Indonesian designers showcased their latest collections from June 29-30 at the Dharmawangsa Hotel.

With the theme “Cita Nusantara” (“Fabrics of the Archipelago”)