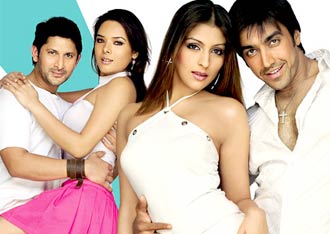 Bumbling, uncivilized losers have long fascinated certain filmmakers. It’s curious really, because there’s a limit to how much time and money a viewer can invest in the stories of such uninteresting or more accurately, downright despicable characters.

Kisse Pyaar Karoon’s opening credits appear against a blindingly yellow background, with a man’s voice screeching the title at a glass-breaking decibel. Arshad Warsi starts talking directly to us explaining why this film’s story is not like Lagaan, Devdas or LOC. He then guffaws that LOC didn’t have a story to begin with, which you reckon is a comment in questionable taste considering Kisse Pyaar Karoon doesn’t even seem a proper film.

Warsi plays wise guy Sid who along with friends John (Ashish Chaudhary) and Amit (Yash Tonk) is clueless and jobless. These are grown-up men who watch cricket matches in a room with popcorn strewn all over, they dance on other people’s furniture when someone scores a six, and generally roam the streets doing nothing, looking unshaven and unshowered. And oh yes, these three actors play college kids, which makes for the only hilarious aspect in the film.

John loves his college friend Natasha (Arti Chhabria with face painted pink and red) who suddenly leaves with a lock on her door. The other two friends decide it’s time to get him “either a prostitute or a substitute”. They also explain to him the futility of love –“Baazar mein doodh milta hai, to bhains paalne ki kya zaroorat hai?” You heard that right; you really did. Dialogue writer Yunus Sejawal (a veteran of this genre, has also written the previously insufferable Tom, Dick and Harry), rap on you knuckles several times over. Dumb, Dumber and Dumbest are discussing this in a pub where they pick a fight with some goons and this dishum dishum goes on for so long, it compelled my viewing companion to time it out of boredom.

As per plan, they go about getting a prostitute first (Shweta Menon, quite a performer; hope she gets her due in better projects) who is dressed like Kareena Kapoor in Chameli. When this doesn’t work, they try hooking him up with a girl (Udita Goswami) they spot in a swimming pool and on seeing whom John licks his lips. Then her different body parts are shown to us in detail, to the sound of a woman singing a high-pitched tune; you know, the kind that always accompanied a scantily clad woman in Hindi films decades ago. John and this girl Sheetal hit it off but she is immediately appalled by his ruffian friends. Accurately calling them aadhi-manav, she asks her boyfriend to choose between her and the friends. He chooses her and this becomes an issue with his friends as they are appalled that a ladki has broken their friendship. They then plot and plan ways to `rescue’ John from Sheetal (who has her own ulterior motives), even as the film continues glorifying their increasingly objectionable behavior.

The technical aspect cracks you up. You might giggle when people’s voices suddenly start echoing in closed-door spaces like a classroom. Pubs are shown to have white and maroon coloured tablecloths, red chairs with the upholstery peeling, and bright candy coloured curtains.

If you do buy a ticket to see the film, and no one can help you if you do, you will be witness to repeated pelvic thrusts too close for comfort, close-ups of jiggling breasts, Ashish Vidyarthi topless, and the three protagonists wiggling their bums at us again and again under the delusion that it’s somehow endearing.

Not surprising then, several people walked out at the interval, especially those with children. It is when you watch such films, such mental and visual assaults, that you are thankful for new tidings in our cinema. The audience has evolved manifold through the years; it’s time the filmmakers realise this and buckle up.