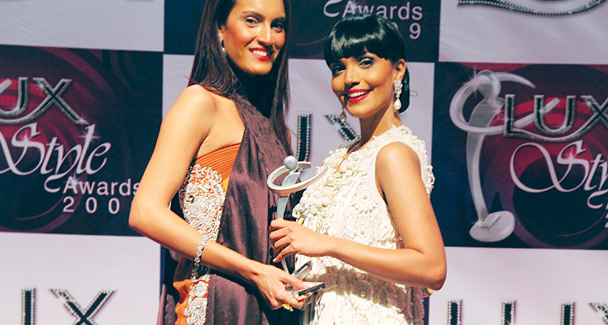 The Lux Style Awards did not take place this year. The actual event with the full fireworks of the four industries – fashion, film, music and television – that collectively stands together under one roof, for one night only was replaced. It was as if the show had been desecrated into small pieces, scattered throughout the room.

For the first time since the inception of the Lux Style Awards in 2002, the show was cut down to a ceremonial photo shoot, which also served as a platform for the media to mingle with the winners and just the winners. No nominees were present either.

While the winners were decked up in stylish garb and holding their trophies, it was a sad state of affairs. Even as the press thronged around superstars like Shaan, the magic moment never happened. The buzz that surrounds the Lux Style Awards evaporated into thin air, leaving one wondering where the show is headed next.

And this pinch was felt by some winners as well.

“I think the award ceremony would’ve happened. It’s a tense situation but Karachi, I feel, is not that unsafe. By not doing the show, we are putting the unsafe stamp on everything. And if we really take that direction, than what’s next? Schools and universities should be closed if it is that unsafe,” said Shehzad Roy when asked how he felt about the LSAs not going forward with an actual ceremony.

Talat Hussain, who picked up the award for Best TV Actor (Terrestrial) for his role in Kabhi Aye Na Judai echoed a similar sentiment.

“It is very unfortunate that we are so insecure in our own country. The show should’ve happened,” he said.

There were some plus points.

“This award is for them. It’s a tribute to these people,” said Faisal Rafi.

Maria Wasti admitted that working in Ramchand Pakistani was a thrilling experience. “I worked with quite a few of the team before because I am a television actor. The experience was fantastic.”

When asked how she felt about the show being canceled, Maria said, “We can look at everything in two ways. We can either shut off or we can look at the things that are happening and hope for things to improve.

Shehzad Roy admitted that winning an award for Qismat Apnay Haath Mein, a record with heavy socio-political undertones, was an encouraging sign.

“The fact that Qismat Apnay Haath Mein can win despite being a politically charged album is encouraging and goes to show that such music can be appreciated.”

The optimistic Khawar Riaz, who picked up Best Fashion Photographer, admitted that the show should’ve happened. But also stated that “even if the show didn’t happen, this photo-op happened and that’s still something.”

Ameer Zeb Khan, who won Best Male Model for the third consecutive time, was thrilled to win. “Things are tough and the situation in the country is difficult. But one can’t stop living. Things have taken a hit, but they haven’t stopped and one can only hope it gets better.”

And the winners are…
CINEMA

Film of the Year
Ramchand Pakistani

Song of the Year
‘Khwabon Key Rishtey’ by Najam Sheraz