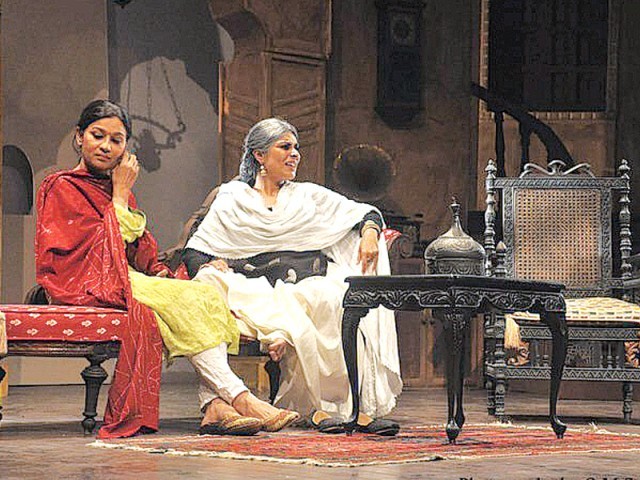 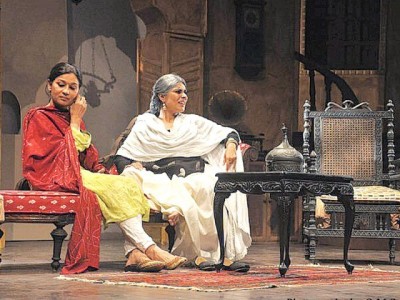 It was not surprising to see posters of yet another period play by the National Academy of Performance Arts’ (Napa) Repertory Theater, where actors talk in difficult Urdu and plots don’t seem relatable at all.

With Begum Jaan, however, Napa managed to break its own stereotype by choosing a well-written drama, executed brilliantly by the actors.

The play revolves around a journalist (Ali Shaikh) visiting Begum Jaan (Nimra Bucha), who was once a classical singer and dancer, to publish an unseen letter from senior dignitaries. The play takes an interesting turn when Begum Jaan tries to barter her daughter’s (Naila Jaaferi) hand in marriage in return for the letters.

Right off the bat, the director needs to be commended for choosing the right set of actors for the right set of roles. Getting two main stream actors to share the stage with a Napa graduate was a welcomed change. The performance on the whole turned out to be surprisingly refreshing and did not include the usual rendition of dialogues.

The success of the play can be partially attributed to a very good script as the dialogue construction was simple, yet powerful. The back-to-back use of relevant metaphors in the play was also powerful. Some one-liners were so catchy that audience members started appreciating the dialogue as they would while attending a mushaira.

However, sometimes the metaphors seemed too forced, and complicated resulting in alienating younger members of the audience. But from the evolution of the characters to the progressive complications in the plot, there was still a lot that the younger crop of playwrights could learn from.

Other than an interesting script, it was the phenomenal acting that elevated the play to a higher level.

Naila Jaaferi was last featured on the Napa stage with Chekov’s Seagull. Despite being part of the supporting cast, she stood out with an absolutely phenomenal performance. From dialogue delivery to her command on Urdu diction to her silent pauses, she entertained the audience throughout the play. The way she carried out the innocence and honesty of such a touchy character is much appreciated. Napa’s female actors should emulate her discipline and learn to avoid gestures that can easily turn a classic play into a run-of-the-mill melodrama.

Nimra Bucha does not need an introduction and it was a pleasure to see the Dictator’s Wife transform herself into Begum Jaan. The role of a classical singer and dancer, who is flirtatious even after the age of 60, was pulled off fabulously.

She lived up to everyone’s expectations and managed to execute a complicated character while delivering some very powerful one-liners with perfection.

Ali Shaikh successfully did what was required of his role — playing a passionate, selfish journalist that would get the story at any cost. Nothing out of the ordinary was expected from his character and that’s exactly how his performance was; he was just a good window into the rich past.

The set of the play was mediocre and the construction was similar to Napa’s earlier production Dil ka kiya rung karoon. However, props such as the old transistor and the music record served a real purpose in the play and were not incorporated only for the purpose of decoration.

Much could have also been done with the lighting. The play would have been much better visually had there been a different lighting setup. Another criticism would be the recorded and unreal sound of the door bell which ruined everything that highlighted the dramatic irony of the play.

After disappointing productions from Napa, Begum Jaan comes as a welcome change. Other than the technical glitches in the production, this was one of the better plays by Anjum Ayaz.