On Day Three, designer duo Asifa and Nabeel showcased Romulus, inspired by the remains of the Roman Empire and featured multi-layered women’s wear in chiffon, georgettes and lace in a diverse colour palette along with menswear.

Tabassum Mughal opened with ivory bridals with a crochet base outfit and going on to a full colour spectrum including peacock feather motifs on a duppatta. Some pieces that stood out in the collection featured model Gia Ali in an Indian-red bridal and one with Ganga Jamni work.

Model Iraj in a peacock throne design-inspired Noorjehan crown with matching motifs on a heavily-worked long coat and VJ Syra Yousuf as the showstopper concluded the segment.

Monia Faruqi’s trousseau collection titled Jazib was for the modern woman with kora dabka and Swarovski crystals featured next. A one-shoulder crystal-embellished candy-pink number stood out. Show hosts Hira and Mani were the showstoppers in this segment.

After the break, Cara by Imran Ikhlaque and Mustafa Shakeel showed extreme luxury and sartorial fashion in a variety of fabrics, material and details with a few smart menswear pieces. Pakistani cricketers Umar Gul, Younus Khan and Zeba Bakhtiar walked for the designers that showed heavy formal bridals in powder pink, fetching reds, light turquoise and model Iraj in a layered white lehenga. 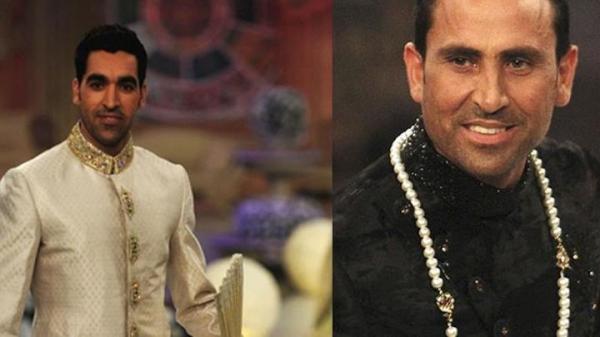 Inspired by Victorian and Mughal eras as well as ethnic Rajasthani jewellery, the segment of Carat Creations by Sheikh Faisal had outfits by designer Zaheer Abbas. The formal and semi-formal trinkets’ collection is 32-karat gold plated with a silver base and embedded by semi-precious stones.

The Grand Courturiers show brought the PBCW 2012 to a grand, befitting conclusion.