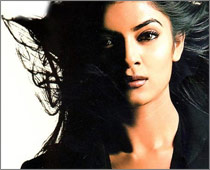 Bollywood’s newest cat-fighter is none other than former Miss Universe Sushmita Sen. The lady who was so far known for her beautiful smile and calm nature has recently taken to picking fights with all her co-stars.

This string of spats began with SRK. The duo fell out over the delay of Dulha Mil Gaya starring Sushmita. Sush must have been impatient for the film to release since this is the first time since the disastrous Ram Gopal Verma Ki Aag that Sush was to appear on screen.

Meanwhile, SRK has a completely different story – rumour has it that he got annoyed that his name was being used to promote the film even though he only has a guest appearance. After an argument, he walked out.

The other enemies on Sush’s list are ex-beau Randeep Hooda and Suchitra Krishnamoorty. This one comes on the heels of Karma, Confessions and Holi. After falling out with Randeep, Sush decided that the steamy scenes in the film were ‘sleazy’ and she demanded they be edited out.

Sush also told producers she won’t promote the film if Randeep is around. At this, a fuming Randeep said, “If you don t want to promote the film, don t promote it, but don t go out of your way to badmouth the film. It s highly unethical and absolutely unprofessional. I don t see any sleazy promotion. By not promoting the movie, she is promoting it even more so that just defeats her purpose. She encouraged me to be a part of the promotion before changing track.”

Even co-star Suchitra Krishnamoorty, who acted opposite SRK in the award-winning Kabhi Haan Kabhi Naa, has drawn swords against Sushmita, calling her claims base-less. She said, “I object strongly to her statement calling Karma aur Holi undignified and defend my film -it has turned out very well and is a brave and ambitious venture-a genre in itself….Some of my major scenes from the script were cut off because Sushmita would insist on reshooting her scenes thereby wasting everybodys time money and good energy.”

This is all bad ‘karma’ for Sush, and it seems she’ll have to face a tough year, especially since her home production on Jhansi Ki Rani has been put on hold.