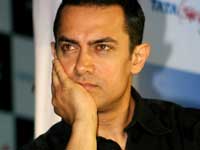 Describing terrorists as ‘people who have no religion or God’, Bollywood actor Aamir Khan has strongly criticised political parties for targeting efforts by security forces to deal with these elements.

Strongly condemning the November 26 terrorist attacks in Mumbai, Aamir Khan expressed his condolences to the family of the brave officers of Mumbai police, who lost their lives leading from the front to take on these terrorists.

He lamented the fact that some of the officials like Hemant Karkare of the ATS were recently targeted by various political parties for the work that they were doing.

“When will these politicians realise and admit that terrorists have no religion. Terrorists are not Hindu or Muslim or Christian.

They are not people of religion or God. They are people who have gone totally sick in their head and have to be dealt with in that manner. Hemant Karkare is an example of a brave officer who gave his life in the line of duty,” Mr Aamir said in his latest blog following the terrorist strikes in Mumbai.

At the same time, he slammed political parties for trying to take mileage out of the present crisis in the Metropolis city.

“I dread to think of how various political parties are now going to try and use this tragedy to further their political careers. At least now they should learn to not divide people and instead become responsible leaders,” the actor said.

“An incident such as this really exposes how ill-equipped we are as a society as far as proper leaders go. We desperately need young, dynamic, honest, intelligent and upright leaders, who actually care for the country,” he said.

“The fact that the locations were huge hotels with multiple floors, hundreds of rooms, many corridors, staff quarters, work spaces, entries, exits, and innocent guests still in there made the task very difficult and delicate.” Speaking on the blog, Mr Aamir said watching various locations in Mumbai turned into a war zone was shocking and heart breaking.

“My heartfelt condolences to the families of people killed and taken hostage. I was feeling sick in the stomach when the fire broke out at the Taj. What would the people caught inside be going through? The fire fighters were doing their best but my imagination was running wild and I was feeling helpless watching other people trapped in the rooms adjoining the fire,” the actor said.