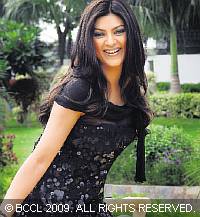 Karma & Holi, with huge dollops of confession thrown in, with the jerky suddenness of a car that decides to gather speed when the highway has ended, is one of those filmed fiascos that should’ve never been attempted. It’s like a Woody Allen ensemble cast about an angst-filled soiree that comes to a sorry state of spluttering incoherence.

The film does gross disservice to all concerned including the poor debutant director Manish Gupta who probably thought he was doing a diasporic version of Woody Allen’s cinema but instead ended making up an extended episode of a Doordarshan serial on the vagaries of the Page 3 crowds.

Sushmita and Randeep try hard to look like a couple with serious marital problems. He takes business calls while making love to her. Maybe he likes the phone better than sex. That’s the least of our worries in trying to make sense of the characters’ dissociated sensitivities.

The film is about an outwardly well-to-do couple played by Sushmita and Randeep who are either showering together or shouting at each other, depending on which way their marital mood swings. One fine day, the couple invites home a group of people including a self-absorbed Pakistani filmmaker (Armin Amiri) and his pregnant girlfriend (Naomi Campbell), a bickering couple (Suresh Oberoi, Rati Agnihotri) and their porn-fixated teenage son, a repressed wife (Suchitra Krishnamurthy) and her bullying husband. By the time the day is done the lid is blown off the façade of suburban marriages in the Land Of Dreams.

Sushmita playing a wife who dances with her maid in the kitchen while cooking (menu rab da vasta!) is more bothered about her swanky new dress being crumpled under sexual pressure than the fact that her husband might be having an affair with his over-sized secretary (Maya Lily).
Sushmita shrugs off her sister’s warning. “Do you think they look like they’re up to anything?”

Frankly, no one looks like he or she is up to anything. That’s the saddest part of a film which wants to say so much. But the words perpetually get in the way.

A few minutes into this mish-mash of Woody Allen, George Bernard Shaw, Govind Nihalani and Keshu Ramsay (the horror of course creeps in unintentionally) and you know the narrative is in trouble. The characters who come to Sushmita-Randeep’s home in New York for an afternoon of heavyduty gossiping, bitching introspection and confession seem to be speaking dialogues borrowed from a cheap American soap opera.
The feelings and thoughts are not only assumed they are also devoid of any coherent pattern. The script tries to be sassy without the basic source material to carry off its ambitions.

The narration is tragically chaotic. The characters seem to be let loose in a room constructed for conflict, and left to their own devices. Ideas of communal disharmony (Rati Agnihotri playing Suresh Oberoi’s sourpuss wife refuses to accept a glass of water from a Muslim filmmaker) and inter-racial coupling (the Muslim director has Naomi Campbell as his girlfriend and punching bag) jostle for screen space with musings on a marriage of convenience in a foreign cultural location where opportunities to f…k – up are illimitable.

Ironically, the film itself becomes one mess with the characters unaware of where to go next or what to do with the dubious responsibility of acting like people who care about the goings-on.

There’s a pubescent horny teenager who’s hounded by a nosy girl (Depal Shaw) with a video camera, a buxom single women who confesses she’s more into women than men and a caricatural pair of American boss-and-bimbo cutting a shady deal with Hooda as wife Sushmita makes her displeasure more than clear. She even shuts the door in her guests’ face. So much for reciprocating the American hospitality.
Somewhere, along the dreadful and droll storytelling, a gangster pops up in the backyard pool with two floozies bouncing by his side as though they had just discovered the reason why they are part of this film.

We, of course, remain clueless as to why Karma & Holi was made. Or why the actors who should’ve known better lent their presence to the film.

While the international cast including Robert de Niro’s daughter Drena remain supremely oblivious of their utility in the plot, Sushmita tries hard to lend some grace and humour to a character hellbent on self-destruction. Another engaging performance comes from Suchitra Krishnamurthy as a repressed wife trying to make herself heard above her husband’s bullying.

Randeep Hooda carries his American accent and demeanour with a flair that scoffs at the film’s cheerless efforts to portray the Indian diaspora as a chamber piece done on a pitchless offkey scale.