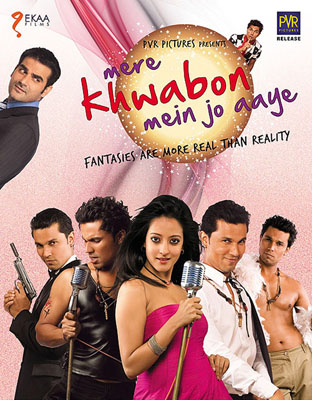 Mere Khwabon Mein Jo Aaye: Give it a slip

Maya (Raima Sen) lives with her hubby Vikram (Arbaaz Khan) and their child Priya. Now leading the life of a bored housewife, Maya had once aspirations of becoming a singer. But she gave up her singing to take care of her family but is faced with a cheating and complaining husband. But following some inspirational words from her neighbor, Mrs.Mathur (Suhasini Mulay), Maya begins seeing her ideal man turn to reality. Her fantasy man, Jai (Randeep Hooda) is someone who sings, is romantic and fills her with courage. And whenever she falters or is faced with a difficulty, there he is in a new avatar aiding her and guiding her. He successfully inspires her to come out of boring married life to reclaim her aspirations and make her compete to win a recording contract. What follows forms the rest of the film.

This film falls in the category that one calls – exciting project on paper but when executed it falls flat. The wafer thin absurd plotline borders on silliness all thanks to some really idiotic writing. The actors – Raima, Arbaaz and Randeep are no seasoned performers to keep your attention on hold throughout the film. In fact with too much attention dedicated on the Maya’s fantasy man, a really good actor in place of Randeep could have made it more enjoyable but the wooden face Randeep simply leaves you irritated. And imagine you have to see him donning 18 various avatars.

Madhureeta Anand in her debut directorial venture shows some style but lacks a good narrative style. Every single frame of the film appears attractive but alas there is no good content to complement it.

Avoid this nightmare… give it a slip.