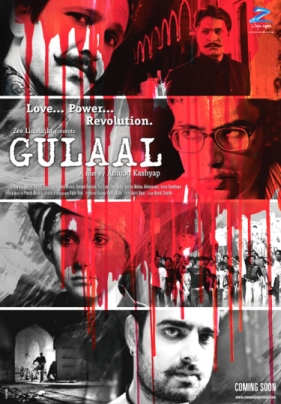 Anurag Kashyap’s latest picture, Gulaal, is surprisingly much less self-indulgent when compared to his previous works. With a running time of 2 hours and 30 minutes, Gulaal is essentially an engaging film that highlights the grim world of student as well as state politics. The story takes place in Rajpur, a fictional town in the princely state of Rajasthan. Unlike most films in the recent past, Gulaal’s Rajasthan is not colourful and effervescent, instead Kashyap depicts a much darker side of the state, where only anarchy prevails. All this has been brilliantly photographed by Rajeev Ravi, who has also worked with Kashyap for DevD and No Smoking.

The story is told through two main protagonists, Dileep Singh (Raja Singh Chaudhury) and Dukey Bana (Kay Kay Menon). While Dileep gets entangled in the corrupt world of politics and infatuated love when he comes to study Law in Rajpur, Dukey Bana on the other hand is seen to be advocating radical ideas for an independent Rajputana, a state exclusive for the Rajputs. A host of other characters, each distinctly different from one another, play important parts in the narrative. Amongst them, Ransa (Abhimanyu Singh) and Prithvi Bana (Piyush Mishra) are most intriguing, where the latter steals the show as Dukey Bana’s mentally challenged brother, who narrates some significant portions of the film through his thought-provoking songs, mostly dominated by satirical poetry. And then there is his companion in the form of Ardha Nareshwar, a half-male and half-female human form of Lord Shiva. The purpose of this character is highly confusing and will probably make little sense even to the discerning audience.

Gulaal’s screenplay is intelligent and engrossing with very well written dialogues but its climax is questionable, which leaves no firm conclusion when it ends. I fail to understand the lack of optimism and hope in Kashyap’s films. It maybe his personal choice and style but it does not necessarily translate into what the majority audience may want from a film. Probably due to this reason, his films have not enjoyed universal success till date.

Also, the lead protagonist in his films is usually a “loser”, which unfortunately is not everyone’s cup of tea at the movies. Nevertheless, irrespective of the type and length of character, every performance in Gulaal is a winner. Kay Kay Menon and Abhimanyu Singh deliver powerful performances which are bound to go down as one of their career best. Deepak Dobriyal as Bhatti and Piyush Mishra as Prithvi are excellent. Raja Singh Chaudhury makes a confident debut but the intensity required from his character towards the climax is somewhat lacking. Jesse Randhawa’s and Mahie Gill’s characters are half-baked which ultimately fail to contribute to the main purpose of the film effectively. Fortunately they play their part very convincingly.

Although the music score by Piyush Mishra may find few takers as a stand-alone product, it fits in effortlessly in the narrative and together with its thought-provoking lyrics, it leaves a lasting impact at the end of the show. Even the sultry mujra, Ranaji, wants you to put on your thinking caps.

Overall, Anurag Kashyap’s Gulaal may not be a perfect film but it is definitely one of the better releases in 2009 and deserves a dekko because of the superlative performances and fearless dialogues. But don’t go in expecting rosy things to unfold on screen. It’s an Anurag Kashyap film after all.