Because Valentine’s Day goes back to Roman times, not Islamic times, this means that it is something which belongs exclusively to the Christians, not to Islam, and the Muslims have no share and no part in it.

So what the Muslims, who are so trying to beat the West in its traditions and fads, would do? How they going to celebrate a day for love while keeping it all Halal?

Here is a special treat for the Valentine’s Day, courtesy Twitter.

Ladies and Gentlemen, we are pleased to present a Muslim Love Story, of sorts….. 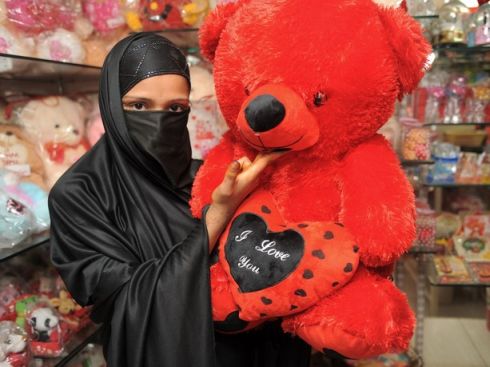 He nudged her, she nudged him back. She laughed, he laughed. He gave a wink and a flower. Then her Abu resets the wifi. #MuslimLoveStory

RT @dorkydoc: She saw his twin sister talk about him and imagined her in a beard. It was love at first mental sight. #MuslimLoveStory

She lowered her gaze and he lowered his gaze. It was love at no sight. #MuslimLoveStory

Windy at the bus stop.. Her hijaab flying everywhere. He takes off his scarf and throws it at her. She never took it off. #MuslimLoveStory

Do you have a Muslim Love Story to share