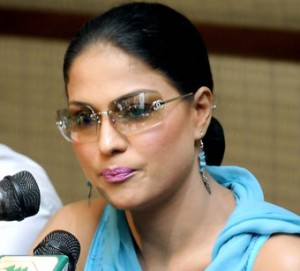 Pakistani actor Veena Malik snubbed rumors alleging that she assaulted a co-actor during the shooting of the film Mumbai 125k.

In a press release, Malik said, “Who is this girl and why should I be insecure of her. She (Vedita Pratap) just wants to garner cheap publicity at my cost.”

“It is a concocted story, I have been in Dubai since the last 30 days, how can I manhandle or hurt her,” said Malik. “The incident which she claims to be real is actually a reel shot and the injuries seen on her forehead were made up for the shot.”

The filmmaker Hemant Madhukar verified Veena’s stand and said, “I am not aware of any such incident on the set of my film. Since December 24, Veena has not shot a single scene for us. I don’t know what Vedita is talking about.”

Earlier, Pratab had alleged that Veena had deliberately hurt her while filming the sequence for the horror thriller film. “It was an action sequence. I was supposed to be beaten up. I don’t know what happened to Veena. She actually hurt me and she did it so badly that I had nail marks on my body.”

Speaking to tabloid Mumbai Mirror, she said, “I don’t know what was wrong with her. And then she pushed me so badly and banged my head on the rod. After the incident, I spoke to the director and told him that she is deliberately doing this. Acting is one thing, but this is just over acting.”