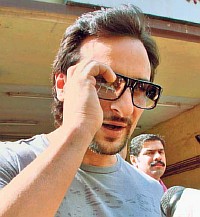 The desperation has reached a point where the filmmakers may be compelled to take public opinion regarding suitable titles for both the films, which will release in mid-2009.

One of the films is a Saif-Kareena Kapoor starrer by Rensil D’Silva while the other is Saif’s home production starring Saif-Deepika Padukone to be directed by Imtiaz Ali. Imtiaz’s film requires a suitably romantic title.

Imtiaz said, “People have been calling my film all kinds of things like Elastic. Why Elastic? We have some time before the film releases in June and I hope we don’t have to arrange a contest.”

Rensil too is urgently looking for a title as he is reluctant to hold a contest to get a suitable name. “My problem is that my film is a thriller and if I want a title through a contest, I will have to give the plot away before its release. I don’t want to do that. I’d rather sit with my producer Karan Johar and find a title,” he said. Saif, who is unfazed by these niggling problems, said, “This proves that it’s getting increasingly difficult to find good titles.” That was, dear Saif, a brilliant observation!